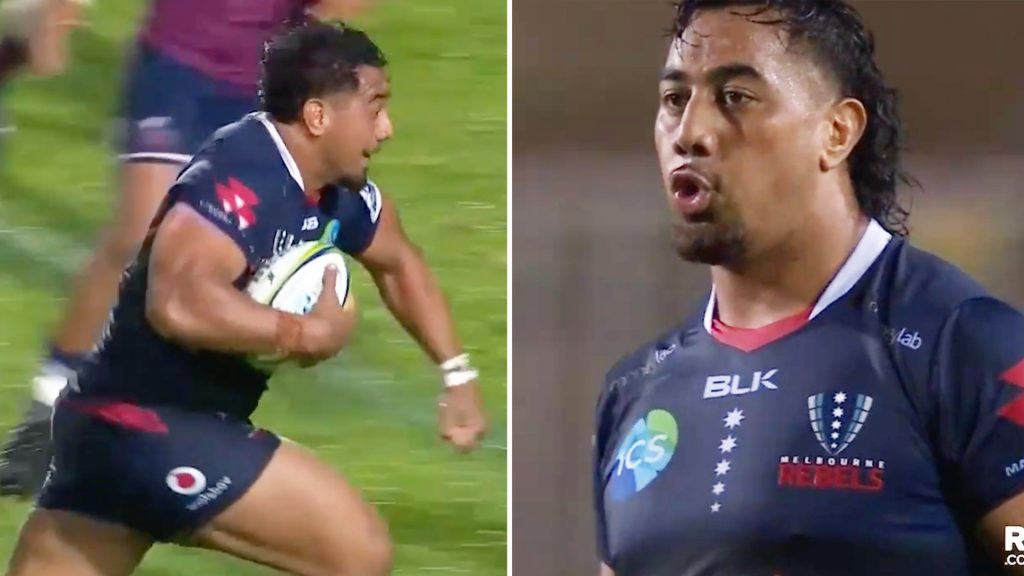 He was devastating all over the park for his side and followed up his monstrous tackle with explosive carries that terrorised the Queensland side’s defence.

It’s been a while since we saw such a sickening hit.

The 23-year-old prop has impressed for the Rebels and has weighed in at 145kg before.

The powerhouse prop has since shed 10kg which has only added to his mobility making the Australian front-rower a devastating attacking threat for club and country.

This bone-crunching hit will have players shaking in their boots going into future rounds of Super Rugby AU.

Watch this awesome display of power below

Cometh the hour, cometh the man. The Blues took an early lead in Saturday night’s top-of-the-table clash against the Crusaders but it was Crusaders pivot Richie Mo’unga who ensured the home side stole momentum back in the second half and emerged victorious.

🔥 The @crusadersrugby take the lead!

First, the flyhalf kicked a relatively straightforward penalty after the Blues infringed inside their own 22. Then, Mo’unga really took his game to the next level.

From the restart, Mo’unga audaciously nudged a short, skidding drop-kick forward 10 metres and scooped it up to set up a Crusaders attack. It was as creative as it was potentially self-destructive but the move came off perfectly, and social media lit up with praise for the All Blacks first five.

While the ridiculous play handed the Crusaders possession deep inside Blues territory, the defending Super Rugby champions weren’t able to convert the pressure into points. Regardless, it sent a strong message to the visiting side that if they turned off for even a second, the Crusaders would pounce – and pounce they did.

Richie Mo’unga thinks to himself:

“60 minutes gone, probably time for me to totally take control of this game, maybe?

Minutes later, Mo’unga sparked the attack that handed the lead back to the Crusaders through some perfect pivot skills.

Entering the final quarter of the game, with the Blues ahead 15-9, the Crusaders had possession on the Blues’ 22-metre line. The Blues defence was holding strong as the Crusaders threw forward after forward at the waiting Blues blockers – then stepped up Mo’unga.

The Crusaders playmaker pumped the ball twice, drawing up the Blues defenders, then delivered a perfectly placed pass out to George Bridge, in space out on the wing. Bridge scooted around the defence then sent the pass back into reserve halfback Mitch Drummond who dived over for a try.