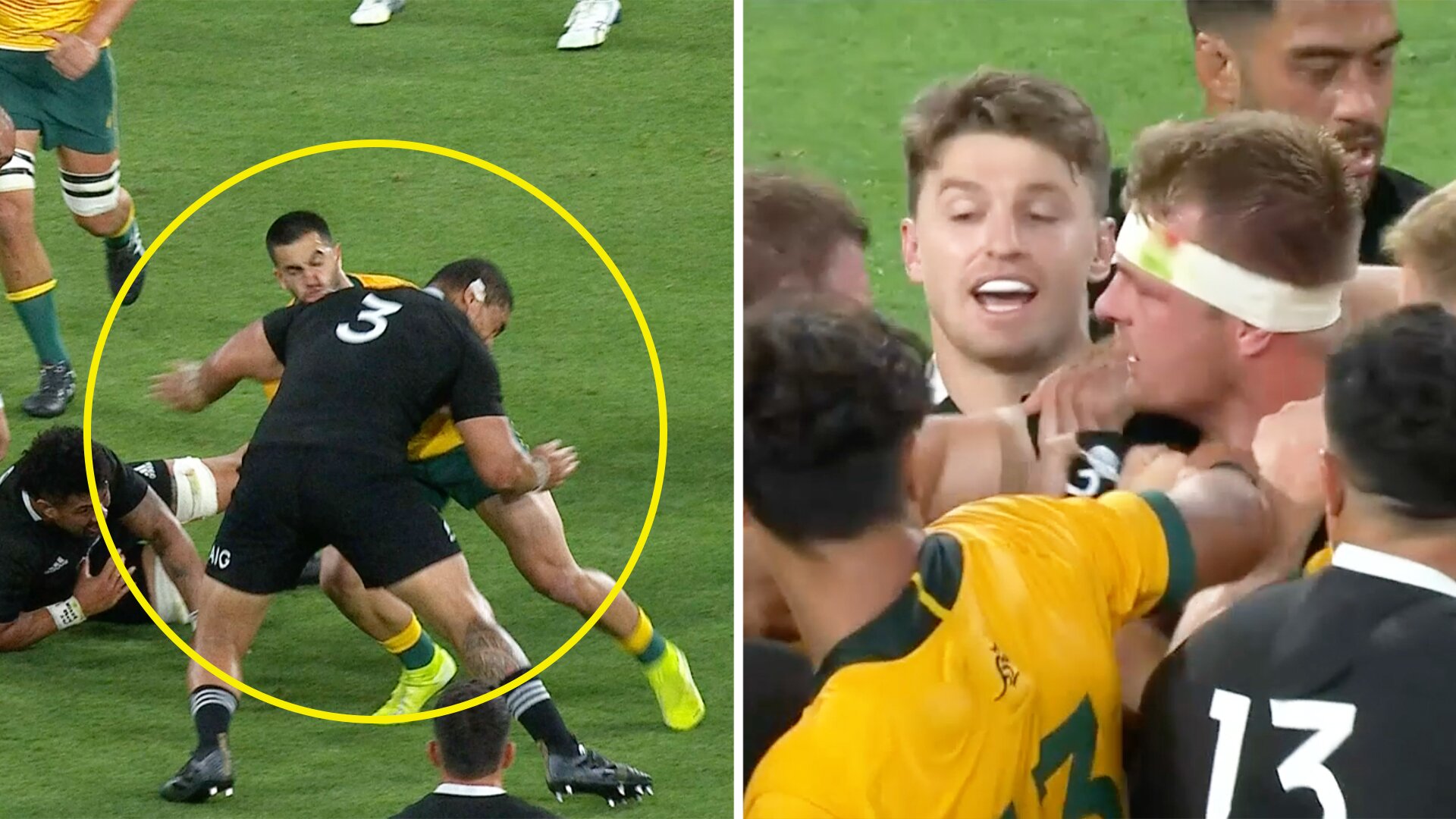 There were fireworks in the first half of today’s Bledisloe Cup clash in Brisbane as a red card was dished out to Ofa Tu’ungafasi for this sickening hit.

Moments later captain Sam Cane was involved in a mass brawl as tensions spilt over after the controversial call in a blockbuster first half.

Did the TMO get this decision right?

The Wallabies were first to score on the night with a well-taken try from Reece Hodge in the first two minutes.

The All Blacks hit back with a score of their own just a few minutes later after Rieko Ioane scored in the corner after brilliant work in midfield by Jordie Barrett.

In what was a furious paced first half the pivotal moment came as All Blacks prop, Ofa Tu’ungafasi, was shown a red card for this sickening hit. The TMO adjudged that there was significant contact to the chin and that there was no other option.

Watch the big moment below

All Blacks face playing 60 minutes with 14 men in Brisbane #AUSvNZLpic.twitter.com/BNZNNxDMMg

Later on in the first half things got even crazier with yet another red card but this time for Australia. In almost a carbon copy of the first red we see as Sam Whitelock has his head snapped back in the tackle with another shoulder collision to the head.

Watch the second first-half sending off below

Back to even numbers 📕 Did Lachlan Swinton deserve a red card?

All you need to know: Wallabies v All Blacks in Bledisloe Cup IV

All you need to know ahead of the All Blacks‘ clash against the Wallabies in Bledisloe IV at Suncorp Stadium in Brisbane.

With the Bledisloe Cup locked in for another year, the All Blacks will give an opportunity to several rookies and returning players for their fourth and final clash against the Wallabies.

Head coach Ian Foster has named four players who are set to make their All Blacks test debuts, including Akira Ioane who starts at blindside flanker, while veterans Sevu Reece and Ngani Laumape also return to the side.

“We have reset this week and our focus has been on this weekend and the Investec Tri Nations,” Foster said.

“It’s an All Blacks-Wallabies test and that’s special. We know how fired up they’ll be, so we have to make sure we are as well, because we don’t want to give ourselves any excuses at the end of it.”

Foster said the new players are raring to go.

“We’ve been really delighted with the whole squad, so we feel that there are some players who are really putting their hand up and deserve an opportunity.

“Secondly, it’s been a big three-week test series to date against Australia. It’ll be another massive test, so we’ve brought in some freshness and new energy into the group. Players are jumping out of their skins to get onto the park.”

The All Blacks will be handed a unique challenge this weekend due to Covid-19 protocols for the tournament.

In a unique build-up to the test, the All Blacks will fly from Sydney into Brisbane several hours before the game and return to Sydney post-game.