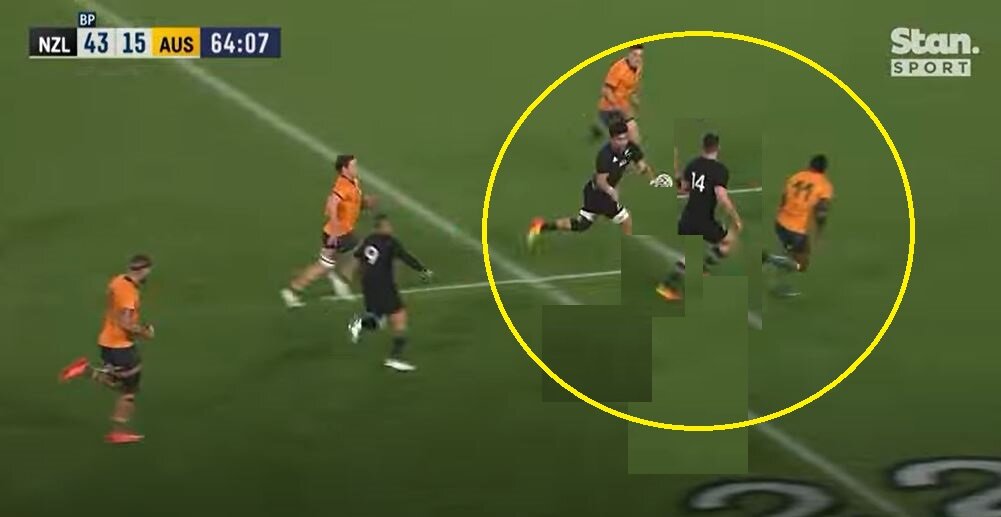 Explain this please? In the 64th minute of Saturday’s second Bledisloe showdown in Auckland, the capital city of New Zealand,  All Blacks back row Ardie Savea breakouts from the clutches of the Wallabies defence and gifts young Will Jordan with a try in the corner… or does he?

A fan sent in this screengrab of the incident and it appears to show the so-called try actually benefitted from a pretty obvious forward pass. We sent it to the Rugby Onslaught forensic lab and they say they’re pretty sure it’s legit.

We understand that the Southern Hemisphere don’t like to referee this rule much, but surely this is too obvious, even for SH eyes?

The All Blacks would probably like World Rugby give them indefinite immunity from forward passes for time immemorial, but Rugby Onslaught will always be watching and holding them to account.

Hooker Codie Taylor will be playing his 60th Test on the weekend, Brodie Retallick his 85th and TJ Perenara his 70th.

The All Blacks and Australia played their 172nd Test against each other. New Zealand have now won 119 of those matches.

The All Blacks selectors had gone with the same forward pack named to started the first Bledisloe cupped test, with hooker Samisoni Taukei’aho coming onto the reserves bench for Dane Coles, and Scott Barrett also returning as reserve lock.

In the backs, Rieko Ioane moved to centre, replacing Anton Lienert-Brown, who took a knock to his knee on the weekend. Sevu Reece moved to the left-wing and Will Jordan came in on the right-wing. Halfback TJ Perenara also returned to the 23.