A behind the scenes video from the 2001 Lions tour of Australia is going viral online after it was released from English tourist Will Greenwood on social media.

The previously unseen clip features a number of internationals from the tour including Lawrence Dallaglio, Austin Healy and Greenwood himself.

The footage was released as part of a wider behind the scenes documentary covering the Lions tour of 2001 – they might not have won the series in Australia that year, but it looked like one hell of a ride.

The clip shows a few of the England stars on tour kicking back with a few rounds of golf.

We see as Will Greenwood steps up to the tee and slams a drive down the green in impressive Happy Gilmore fashion. As he strikes the ball perfectly he turns to the camera with his teammates lauding his well-struck effort.

Will Greenwood after nailing his Happy Gilmore shot 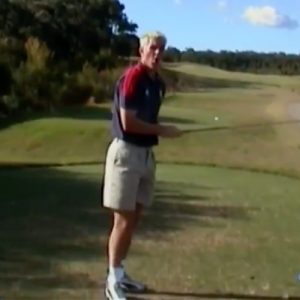 The video then moves on as the players make their way onto the next hole. We watch as Lawrence Dallaglio gets into his buggy with Greenwood and Healy stood next to theirs alongside him.

We see as the England number eight’s gold clubs fall out of the back of the buggy – having been untied by Healy.

watch the Lions tour video below

Brought a smile to my face..

Bringing out my old party trick…

It’s a miracle that Austin Healy stayed in one piece after all those years of pranks on his international teammates.

There was more brilliant behind the scenes footage from the 2001 Lions tour that was shown in the documentary, ‘Up Close and Personal’ that followed the tourists in Australia 20 years ago.

Here is an emotional scene from the dressing room following the team’s decisive loss in the third test against the Wallabies.

A glimpse inside the locker room following the 2001 Series decider against Australia.