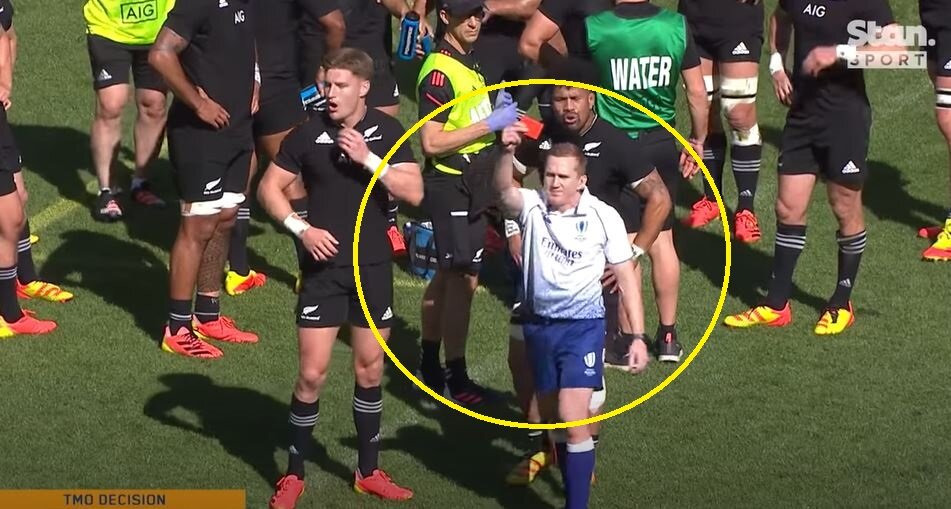 All Blacks full-whack Jordie Barrett have correctly been given a red card for a flying kick on Marika Koroibete, an attack that could have killed the brave Wallaby winger.

He was sent straight off, but not before All Blacks fans tried to make allowances for it, describing it as ‘incidental’ and ‘Koroibete’s fault’.

Victim blaming if ever I heard it.

This rugby, not MMA. Barrett will likely be banned for six months to a year. Maybe Dana White will get on the blower and try and set up a fight with Darren Till. At this rate you’d fancy Barrett’s chances.

Sadly, with the new red card laws, he only got 20 minutes off, which completely defeats the purpose of red cards. He of course came back and scored a crucial try that left the Wallabies staring down the barrel of another awful defeat.

It was the All Blacks and Australia’s 173rd Test against each other. Coming into it, New Zealand had won 119 of those matches, Australia 45 with eight draws. The All Blacks have held the Bledisloe Cup since 2003.

Damian McKenzie’s long-range kick in Bledisloe II was his first penalty goal for the All Blacks. He has also scored 14 tries and kicked ten conversions.

The All Blacks have scored 46 tries in five matches so far this year and are sharing the spoils: so far 18 players have scored tries this year.

Samuel Whitelock played in his 127th Test in Bledisloe II. He and Kieran Read are now third on the list of most Tests for the All Blacks.