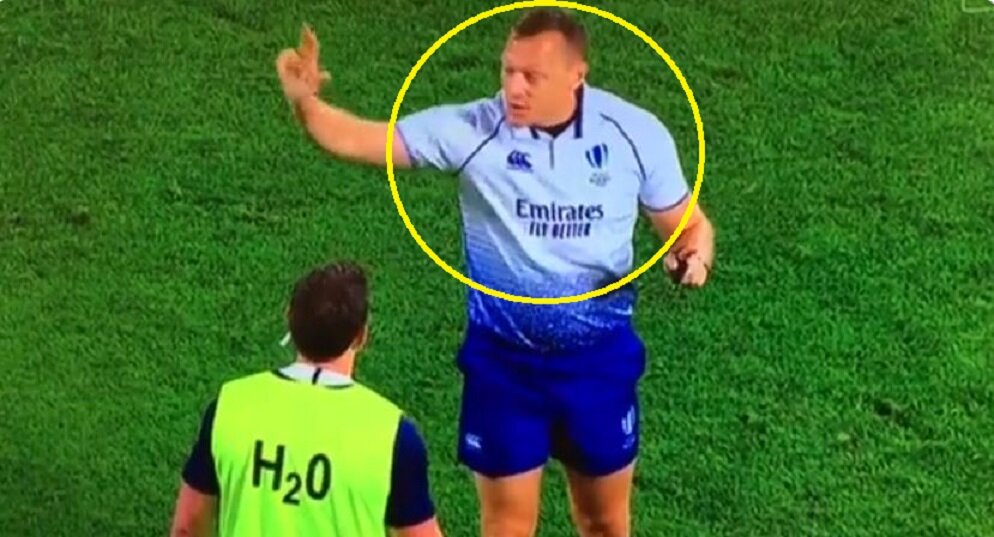 Boks should be stripped of win because of waterboy’s behaviour

The Springboks should be stripped of their win over the All Blacks and so too the World Number 1 spot because of the behaviour of their waterboy.

The waterboy could clearly be seen trying to use the standard Springbok bullyboy tactics to influence his decision. No doubt he was shaken by the run-in, in what was another example of the lack of respect for officialdom that this Springbok camp seems to condone.

Brave match day referee Matthew Carley was forced to tell the waterboy: “If I see you chasing our touch judge again, you’ll be off.”

The Springboks should now be stripped of the win and no doubt World Rugby will be investigating this incident. God knows they have enough on their hands dealing with Rassie’s video.

Great to see from referee Matthew Carley in the #RSAvNZL #RugbyChampionship match. The way the Boks staff & players have been behaving towards officials and the laws of the game has been disgraceful. pic.twitter.com/1Yv5ixenyR

Head coach Jacques Nienaber replaced the whole front row after 38 minutes and started the second half with Frans Steyn at fullback. He also gave Elton Jantjies a solid run with the left-footer rewarding him with well-taken drop goal – his first in green and gold – and the match-winning penalty goal.

“As I mentioned last week, I wanted to use Elton, but then had the injury to Marco van Staden which prevented that as we might have finished the game with 14 players [if Van Staden’s injury worsened],” said Nienaber.

“This time I decided to use them much earlier and I think we were doing much better today in that regard.

“Elton was awesome when he came on, and Frans Steyn was brilliant. Willie did some good things, and did make some mistakes, but I wanted to bring in Frans for the 50/22 kicks. He trained well with us and did very well when called upon.”

Nienaber also explained why he replaced the front row before the halftime whistle.

“We see them as a combination and the minutes played will never be the same. The moment we felt the first group has done their job; we will bring on the second group,” he said.

“Today they emptied their tanks after 38 minutes and I replaced them when they did their job. After last week, I decided we should make use of our subs and I thought they were all excellent tonight.”