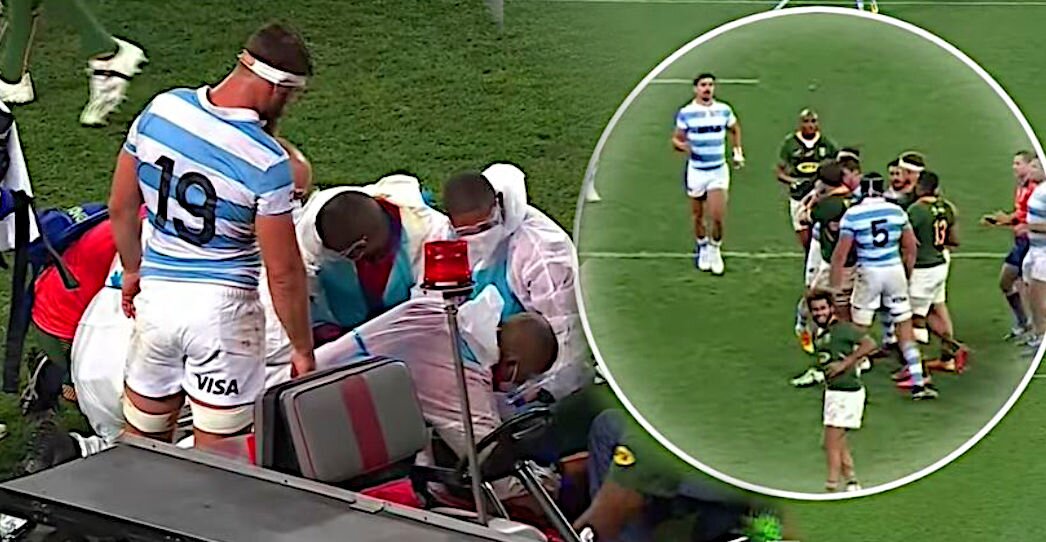 Newly capped Springboks scrum-half Jaden Hendrikse is now facing a long spell on the sidelines after a late tackle fractured his leg on Saturday, sparking a brawl against Argentina.

In the final ten minutes of the match, Hendrikse, who had not even been on the field ten minutes, was hit late by Marcos Kremer after a kick, causing the 21-year-old to collapse onto his left leg with the weight of the 18 stone loose forward Kremer on top of him. This was a pretty cynical piece of foul play, which on another day could have seen the Argentinian yellow carded.

Franco Mostert quickly came to his scrum-half’s aid, protesting to the referee that it was a late tackle before slapping Kremer’s head. This enraged the Puma, which started a brawl while Hendrikse remained on the floor. The Sharks No.9 was then stretchered off the field with Springboks head coach Jacques Nienaber confirming the severity of the injury on Monday.

“It is sad to lose a player like Jaden who was really beginning to find his feet in the system and starting to make his mark in Test rugby, but unfortunately injuries are part of the game,” said Nienaber.

The Sharks’ Grant Williams has been called into the squad to replace Hendrikse, alongside fellow scrum-halves Faf de Klerk, Cobus Reinach and Herschel Jantjies.

Take a look at the tackle and the brawl that ensued here:

This is an unfortunate end to the season for Hendrikse after making his debut last weekend against the Pumas. His rise to the Springboks squad came after an impressive display against the British & Irish Lions for the Sharks in July, but he now faces a lengthy spell out.