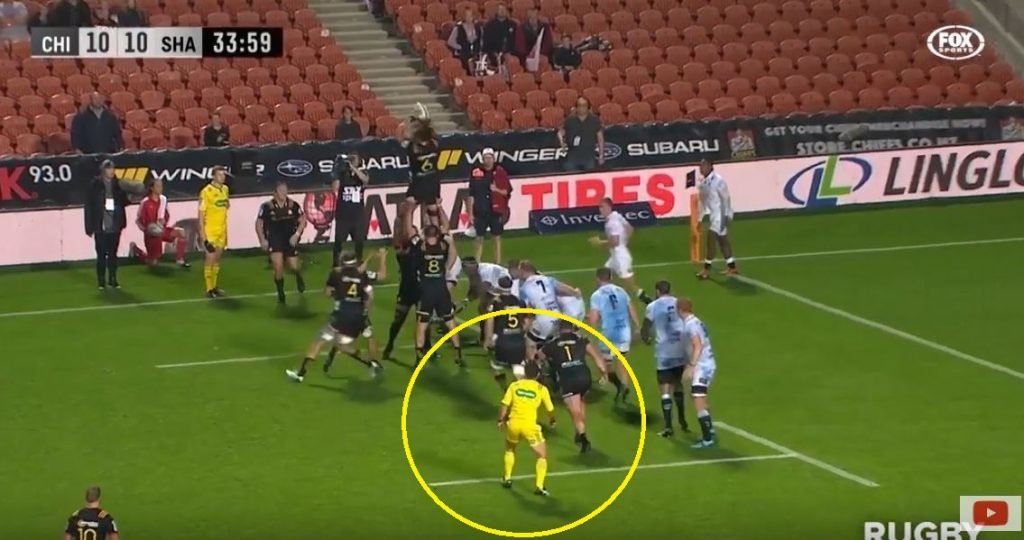 This really shouldn’t happen and it needs to be stamped out now.

The Cell C Sharks gave another impressive performance on the road but they unfortunately went down 29-23 to the Chiefs in Hamilton on Saturday morning (SA time) in their last Vodacom Super Rugby tour match through Australasia.

Australian referee Nic Berry clearly slides over the line to blow the whistle as he awarded a Chiefs try against the Sharks in their Super Rugby encounter in Waikato this weekend.

It was an entertaining fixture between two evenly matched teams, with the men from Waikato taking a 17-13 lead into the break through two tries and a penalty goal. The Chiefs eventually scored four tries, three conversions and a penalty goal, while the Durbanites replied with two converted tries and three penalty goals.

The Durbanites did extremely well to play themselves back into a potential winning position and led 23-17 with just under 20 minutes to go – the result of good defense, powerful forward surges and good tactical kicking from Bosch.

However, two quick tries in the last 13 minutes tilted the momentum and scoreboard in favour of the Kiwis. Chiefs midfielder Anton Leonard-Brown dotted down before Brad Weber (scrumhalf) scored another try straight from the restart.

The Chiefs led 29-23 going into the final few minutes, but the Cell C Sharks turned over possession deep inside their own half, and in a tense finish, the visitors forced the men from Waikato to defend for 18 phases before Bosch made an unfortunate handling error after the fulltime hooter.

The Cell C Sharks can be very pleased with the overall outcome of their three-match tour which started with a win over the Waratahs in Sydney and a draw against the Crusaders in Christchurch. They now return to Durban for a well-earned break next weekend and then resume action when they host the Emirates Lions on 25 May in another big local derby.