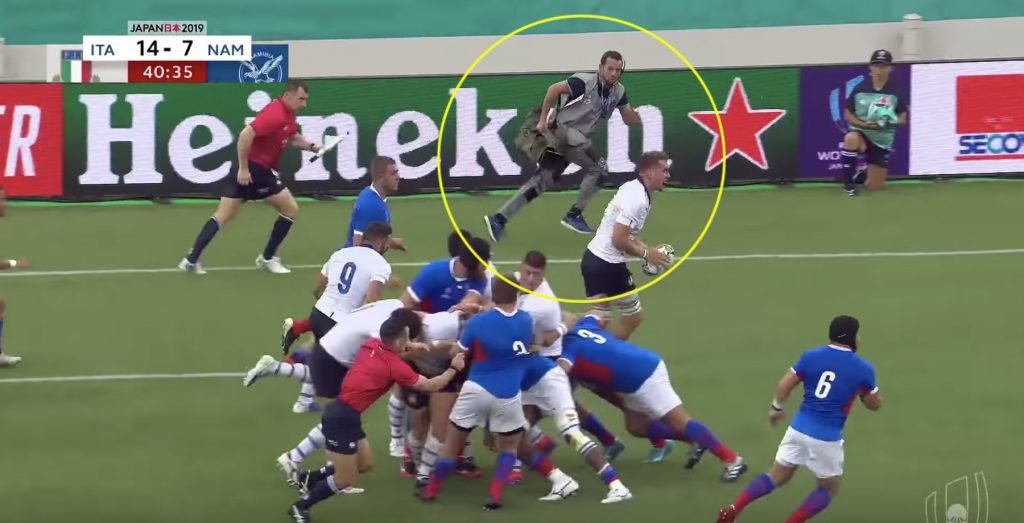 Cameraman has everyone talking in Italy vs Namibia match

Italy vs Namibia may have been one of the quieter clashes in this weekend’s rugby fixtures. With the likes of South Africa vs New Zealand, Australia vs Fiji and Ireland vs Scotland, you’d be forgiven for missing the absolute choste that is the cameraman in this clash.

We noticed when we watched the match that the cameraman on the side of the pitch has ABSOLUTE wheels. Like serious gas. In this clip that comes up here, the cameraman isn’t just running, the lad is carrying a 15-20kg camera AND keeping it stable to film the footage.

Now don’t tell us that that isn’t simply fantastic. To all the nauses saying that this isn’t impressive. When you get a chance grab 15kg dumbbell, sprint in a straight line and keep the end of the dumbbell facing straight. #Chancers

In other news: Absolute Unit Magnus Bradbury is finally selected for Scotland

Watson – the 28 times capped openside flanker – sustained a knee injury in the national team’s opening Pool A defeat to Ireland at the International Stadium Yokohama yesterday, with a post-match scan confirming he’ll play no further part in the tournament.

Bradbury – who was in Japan as precautionary injury cover – will take the place of his Edinburgh teammate in the 31-man group.

Scotland Head Coach, Gregor Townsend, said: “While there is a high probability of picking up injuries during a Rugby World Cup, it is always disappointing to see someone having to head home.

“We feel for Hamish, who had worked so hard for this opportunity, and wish him well in his recovery.”

For anyone who hasn’t seen Bradbury play is he’s an absolute unit. He dominates at every opportunity.