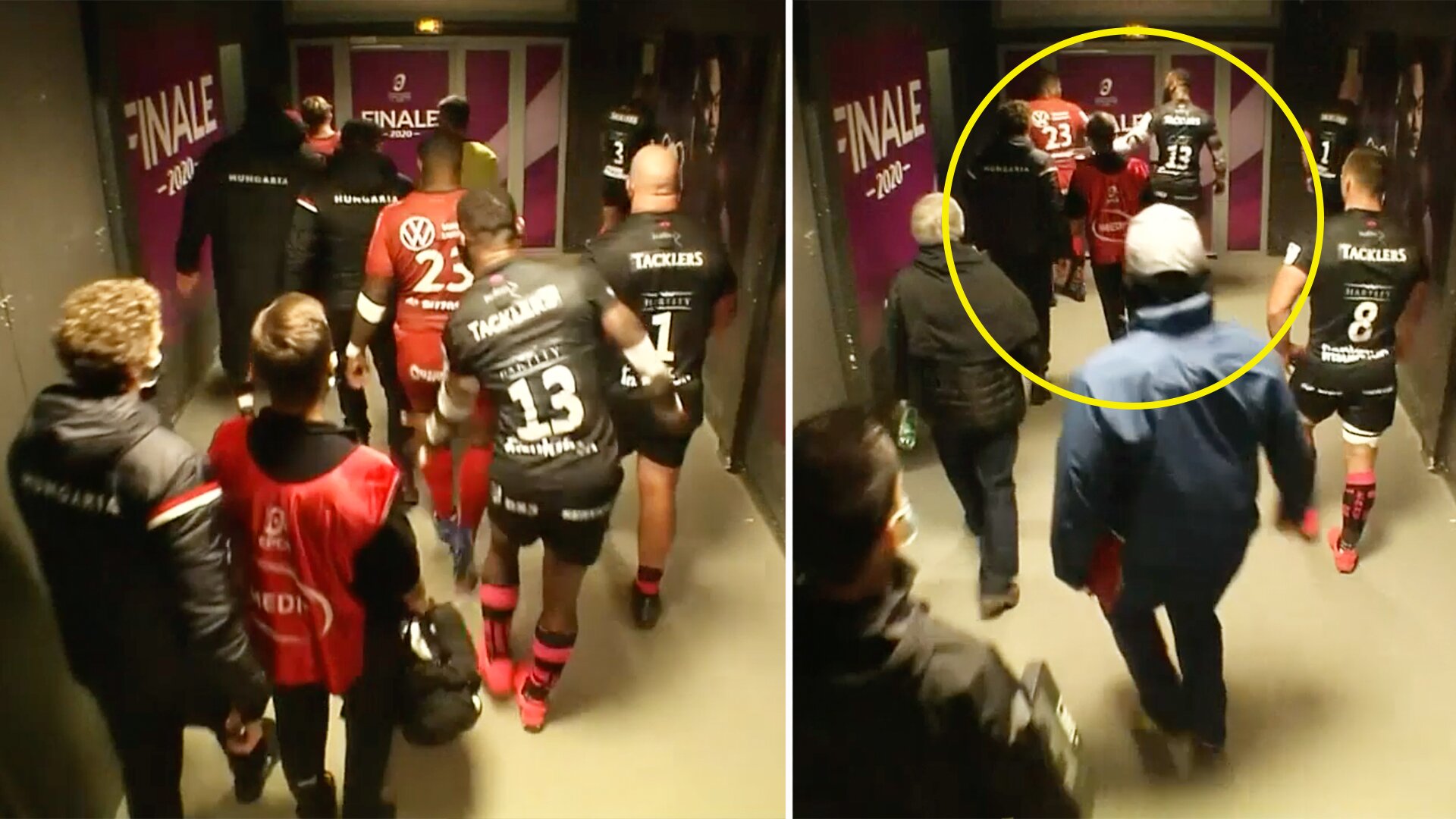 Viewers at home were shocked as they watched tonight’s Challenge Cup as the players got to grips with each other in the tunnel at half-time.

Toulon took a 10-16 lead into the break after a pulsating opening forty minutes in France.

Bristol opened the scoring within just 16 seconds after a magnificent score through some sublime handling from their talismanic centre, Semi Radradra.

Watch the record breaking score below.

OH MY WORD! That is how you start a European final @BristolBears 🤯

DO NOT kick the ball to Semi Radradra, you have been warned!

It was, however, scenes at half time that grabbed headlines as the tensions on the pitch spilled over into the tunnel as the players made their way to the changing rooms. We see as members of both teams move down the narrow corridor together in close quarters to each other.

Then we see as Semi Radradra runs through and grabs a Toulon player from behind before they come together at the end of the tunnel.

Watch the shocking half time scenes below

Semi Radradra getting to grips with the Toulon players at half time 👀 🍑 pic.twitter.com/arWqJoHeL9

Rob Baxter has made two changes to his Exeter side to face Racing in Saturday’s Champions Cup final following their Premiership semi-final win last Saturday over Bath.

Really enjoyed waving off @ExeterChiefs earlier as they left Sandy Park for Bristol for their 1st ever @ChampionsCup final. To say everyone is buzzing is an understatement pic.twitter.com/0lmINeKlPb

Up front, Baxter sticks with an unchanged pack from that which saw off Bath 35-6, but behind there are two changes with Ian Whitten – on his 200th Premiership and Champions Cup appearance for the club – given the nod in midfield over Ollie Devoto, while Jack Nowell comes in on the wing for Olly Woodburn.

England winger Nowell, 27, wasn’t included in the league semi-final selection due to a foot injury sustained in the European semi-final against Toulouse, his place going to Woodburn.

But Baxter hinted at Wednesday’s pre-Champions Cup final media conference that Nowell was in his thoughts to start for Exeter despite not playing since September 26.

“We take a long time on selection and we look at all of those things. You look at Jack, how he played before he picked up that foot injury late on against Toulouse, how he played against Northampton when he scored a fantastic try in that game, how he has played in other big games for us,” Baxter explained.

“I don’t think I have seen a winger play a better game in the Premiership final than Jack Nowell played last season, so you look at that and you know what he’s capable of doing. But at the same time, we have to watch him train and assess it carefully to make sure he is at the level to be able to perform like that.