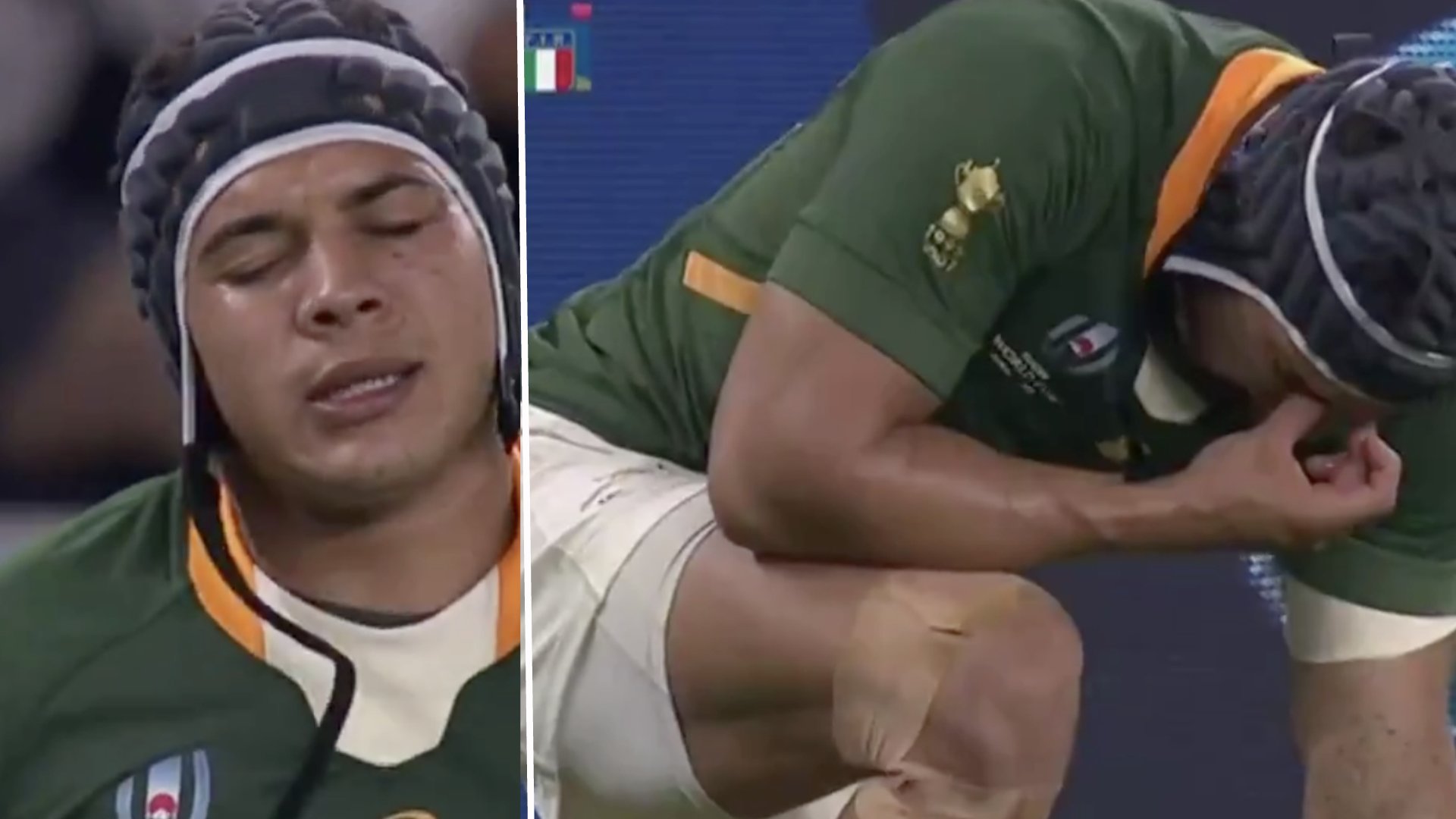 Very worrying times for South Africa in their World Cup clash with Italy as their star man Cheslin Kolbe appeared to pull up injured in the final few minutes of their game. Injury worry for the Springboks.

Kolbe was having yet another fantastic game for South Africa for the men in green and the rugby world was loving him. The Rugby World Cup social media team put this clip out of him after he tackled a man and then instantly came back to help him up. Just shows the kind of man that he’s like.

Makes tackle, gets up, helps opposition player off the ground. Cheslin Kolbe a great player and a great man. #RSAvITA #RWC2019

But it’s not acts like this that will make the headlines today with Kolbe.

In the final few minutes of the match, Kolbe appeared to pull up with an injury to his right hamstring at the very end of the match. The look on his face said it all, a man whos World Cup may very well have ended. Kolbe clearly distressed after his injury.

You can see how upset he looks here and the South African crowd also look very worried about this injury possibility. Kolbe has undoubtedly been the man of the tournament so far for South Africa with some brilliant performances against Italy and New Zealand.

Hamstring injuries can take between 3-9 weeks to recover so could Kolbe be looking at an early World Cup exit if this injury is worse than it looks.

Here is the video of him pulling up with the injury.

The Toyota Cheetahs and Isuzu Southern Kings are gearing up for a tough Guinness PRO14 challenge on Saturday against Irish giants, Ulster and Munster, in a mouth-watering second round of action.

The Toyota Cheetahs take on Ulster at the Toyota Stadium in Bloemfontein where they will look to build on their impressive victory against the Glasgow Warriors, while the Isuzu Southern Kings – who come off a narrow defeat against the Cardiff Blues – will have their sights on continuing their resurgence under the new coaching staff.

Stand-in Toyota Cheetahs coach, Franco Smith, believes that Ulster will pose a “tough test” and said the visitors will be ready after watching their game against Glasgow last week.

“We want to keep on and get better,” said Smith.

“We agreed after the review of the Glasgow game that there were some excellent moments. In the last seven or eight games we had some 10 out of 10 moments, but in general there are still some things we have to work on.

“It is important for us to kick on from last week, but we are not naïve. We might have caught Glasgow on an off-day.

“We are playing better and better every week, but they would know that. Ulster will come here come here to prove us wrong after last week’s result and more so knowing that we won the Currie Cup.

“Last year we drew here, so I think they would love to get one over us in that regard. I believe, and said it to the team in so many words, that this will be the toughest challenge this year.”

Isuzu Southern Kings midfielder, Sibusiso Sithole, believes the Port Elizabeth side can meet the expectations of their fans when they host Munster at the Nelson Mandela Bay Stadium.

“We can definitely achieve a lot,” said Sithole.