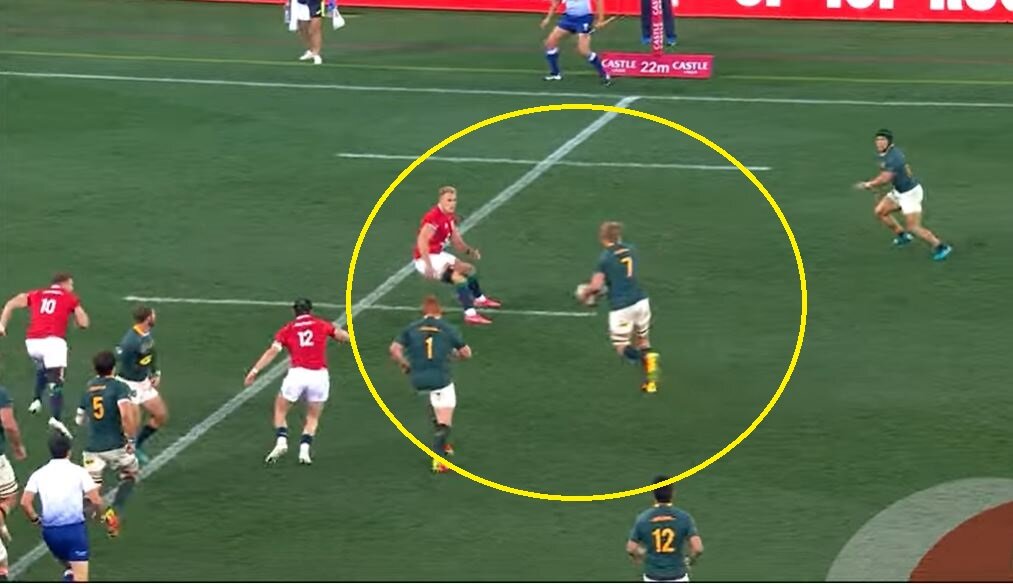 The colossal hit came just minutes into the game and proved that the Scottish wing giant is a man without equal in the Southern Hemisphere.

Before you start, it doesn’t matter that Van der Merwe couldn’t catch a ball after that. Those details aren’t important. What matters is that the Lions won the man-up-a-thon in the first half.

Moral victory in the bag!

Jokes aside, we don’t see how that tackle alone would have injured PSDT, and we presume he must have been bringing an injury into the game. We hope he makes a rapid recovery from the injury.

Meanwhile experienced No 8 Duane Vermeulen will join the Springbok team at their Cape Town base on Sunday after missing the opening two Tests against the British & Irish Lions due to an ankle injury.

Vermeulen, who reported for duty briefly at the team’s training camp in Bloemfontein in June, has been undergoing rehabilitation following surgery several weeks ago.

However, his steady progress proved to be sufficient for Vermeulen to be called up to the squad that drew the Castle Lager Lions Series one-all with a convincing 27-9 victory on Saturday.

“Duane will join us on Sunday and will be medically assessed as soon as possible,” said Springbok coach Jacques Nienaber.

“We will never risk a player who is not 100% fit but he brings experience to the squad and it will be great to have him with us.”

Nienaber added that the Boks will know more about Pieter-Steph du Toit’s injury on Monday.