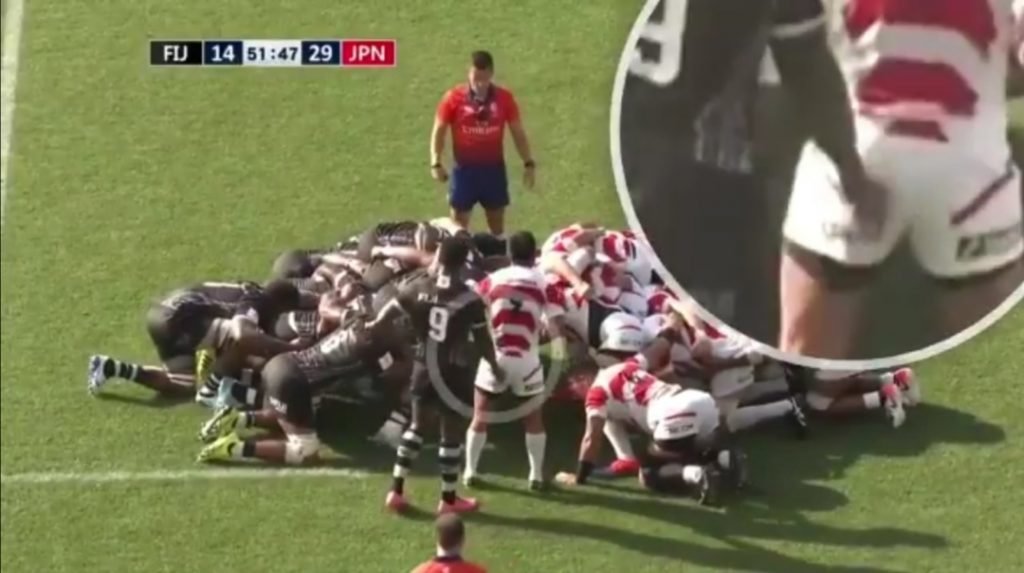 Does Fiji scrumhalf Lomani cross the line with this cheeky gamesmanship?

Some will think this is pure 9 ringcraft, others will see it as disrespectful.

The Toyota Cheetahs showed off their attacking skills in the Currie Cup Premier Division – sponsored by DirectAxis Financial Services – as they powered their way to the top of the standings thanks to a 10-try romp against Tafel Lager Griquas in a gripping third round this weekend.

The Free Staters’ 68-14 victory marked their second bonus-point win in as many weeks, and it ensured that they remained one of only two unbeaten teams. The other unbeaten outfit is the Xerox Golden Lions, who pipped DHL Western Province 30-28 in an epic clash in Cape Town on Saturday.

In Friday’s game, the Vodacom Blue Bulls earned their first win as they held their nerve in a tight tussle against the Phakisa Pumas in Nelspruit for a 25-17 win.

In the Currie Cup First Division – also sponsored by DirectAxis Financial Services – the Jaguares XV continued to show their class as they earned their four successive victory, while Boland also gave a good account of themselves in an exciting round.

The Jaguares XV powered their way to a 54-15 win against the EP Kings in Port Elizabeth, while Boland outplayed the SWD Eagles 32-3 in George, the Leopards defeated Border 38-29 in Potchefstroom, and the Valke and Down Touch Griffons played to a nail-biting 31-31 draw in Brakpan.

The Toyota Free State Cheetahs were in superb form against Tafel Lager Griquas in Bloemfontein as they ran in an impressive 10 tries – with braces by Joseph Dweba (hooker), William Small-Smith (winger) and Dries Swanepoel (centre) – en route to their 68-14 victory. The win marked their second in as many weeks, while the defeat for the visitors marked their first in the competition.

Such was the Free Staters’ effectiveness on attack, they had their bonus point for four tries wrapped up by halftime. They added six more after the break – four of which were in the last quarter – while the men from Kimberley managed to break through the defence only twice. Click here for the match report.

In Cape Town, the Xerox Golden Lions ground out their second win with a penalty goal and vital try late in the match while opponents DHL Western Province were down to 14 men, earning them a narrow 30-28 victory in Cape Town.

The hosts built up an encouraging 21-10 halftime lead as they put their strong rolling maul to good use, which earned them three first-half tries, with a brace by hooker Scarra Ntubeni.

They stretched it to 28-20 in the third quarter, with their bonus-point try after the Xerox Golden Lions scored a penalty goal and try. But Coetzee’s yellow card allowed the visitors to add a penalty goal and a try by speedster Tyrone Green with minutes to go. DHL Western Province had a shot at the goal posts to possibly secure a win, but the attempt went wide. Read the match report here.

A hat-trick by Vodacom Blue Bulls winger Rosko Specman steered the team to their first victory of the season as they defeated the Phakisa Pumas 25-17 at the Mbombela Stadium.

It was a game fueled by desperation as both sides gave everything in the hope of earning a victory to stay alive in the competition, and the Vodacom Blue Bulls’ three tries to two by the hosts, and vital penalty goals by flyhalf Marnitz Boshoff and his replacement Manie Libbok respectively sealed the victory for them. Click here for the full match report.