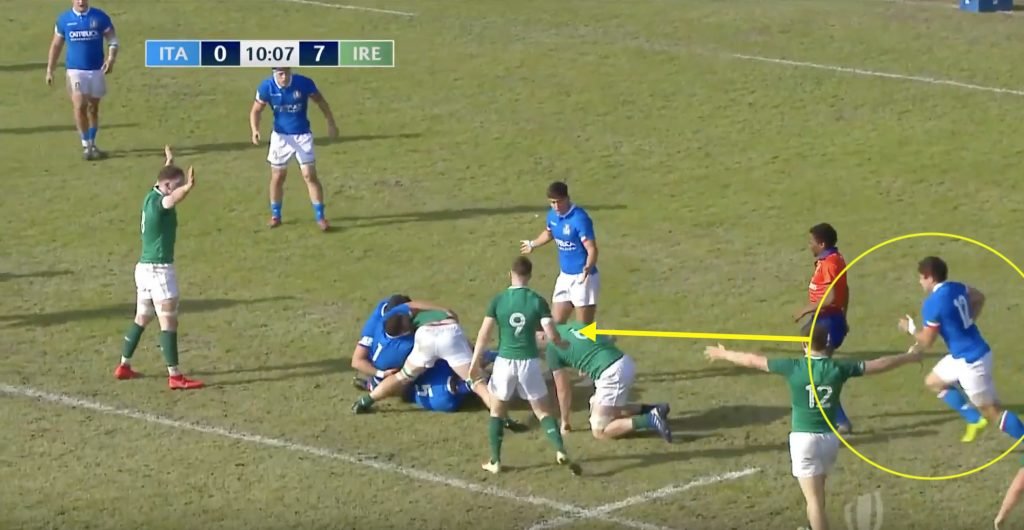 In today’s match between Italy and Ireland, there was a horror clean out by Italy’s centre and it truly was awful. The Ireland second row appeared to be over the ball well and the clear out was awful. He came out of nowehere to clear him out and he could have certainly injured him!

We normally post positive things about the Under 20’s here but this horror challenge left us with no choice but to condemn it.

In other news: Catrakilis to leave Harlequins

Fly-half Catrakilis joined Harlequins ahead of the 2017/18 season from Top 14 side Montpellier and has gone on to make 13 appearances for the Club over two seasons unfortunately dominated by injury.

Despite suffering a serious throat injury early in his first season against Gloucester Rugby at The Stoop, Demetri returned to the starting line-up in March where his accurate tactical and place kicking was instrumental to the victory against Bath in the Aviva Premiership.

The standoff’s skillset also came to the fore this year during Quins’ European Challenge Cup Quarter Final victory against Worcester Warriors at Sixways, where his precision with the boot helped secure his side’s first European Semi-Final in three seasons.

“His game time has been limited this season partly due to injury allied to the continued development of Marcus and James at 10. We thank him for his contribution and wish him and his wife the very best in their next chapter.”

Catrakilis added: “I’m grateful for the chance to grow as a person over the last two years at Harlequins. I’d like to thank the fans for their unwavering support of the Club and players – I’ve made some great friends here!

“I’d like to wish the Club all the best for their upcoming season and I will be cheering on the boys from afar.”