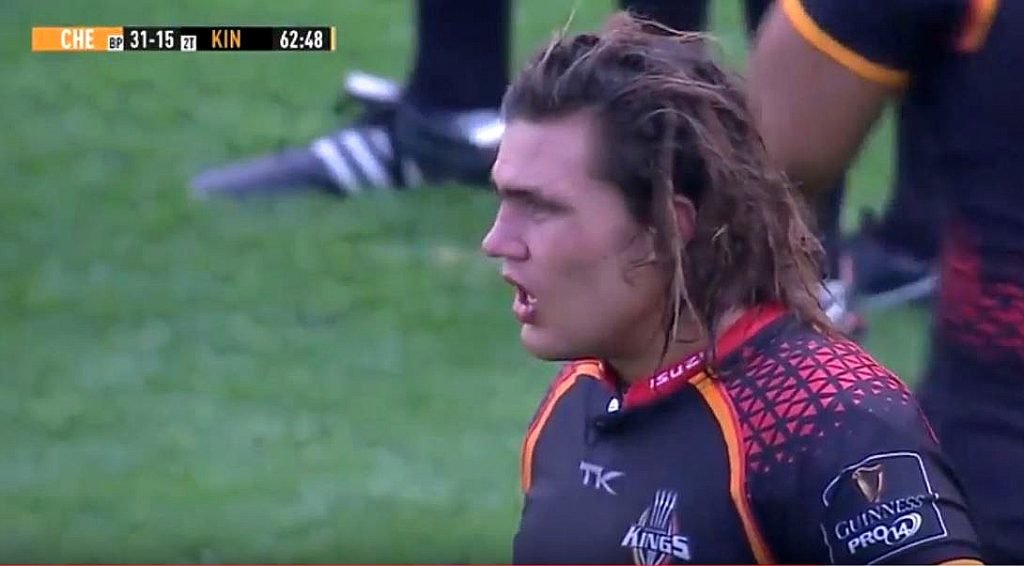 A pretty cowardly hit from the PRO14 derby between the Kings and the Cheetahs saw a red carded issued.

CJ Velleman of the Kings was sent off for brutal post try elbow hit the Cheetahs try scorer.

The Toyota Cheetahs secured a historic fourth Guinness PRO14 victory in a row on Saturday as they defeated the Isuzu Southern Kings 40-36 in a thrilling showdown in Bloemfontein and stay in contention for a possible playoff spot.

The Free Staters – whose best run in the competition up to now was three successive wins – built up a 19-10 lead at the break and managed to stretch it to 40-15 in the 65th minute after the Isuzu Southern Kings were reduced to 14 men following a red card.

But instead of giving up, the Port Elizabeth outfit threw the kitchen sink at the hosts, and it paid off as they managed to secure two bonus points for tries and losing by seven points or less.

In the end the hosts outscored their rivals six tries to five, but despite the close scoreline they will draw comfort from the fact that they are now only two log points behind the third-placed Ospreys in Conference A, and 12 and 10 points adrift of table-toppers, Munster and the Glasgow Warriors, with seven pool matches remaining. The top three teams in each of the two conferences will qualify for the playoff stages.

The Isuzu Southern Kings opened up the scoring in the second minute with a penalty goal, but the home side showed their intent soon after as Shaun Venter and Tian Schoeman scored tries within seven minutes.

The visitors were dealt a blow minutes later as Meli Rokoua received a yellow card for a high tackle, and the Toyota Cheetahs’ William Small-Smith capitalised on this immediately for their third try and 19-3 lead.

The Isuzu Southern Kings hit back with a try by CJ Velleman shortly after Toyota Cheetahs lost Joseph Dweba to a yellow card, and their discipline continued to cost them as William Small-Smith was also sent to the sin-bin before halftime.

The Isuzu Southern Kings opened up the scoring again in the second half thanks to a try by speedster Yaw Penxe, but the Toyota Cheetahs again showed their class when their full complement of players was restored, as Malcolm Jaer and Junior Pokomela touched down to push their score to 31-15.

The visitors were dealt a massive blow soon after as Velleman received a red card for a dangerous charge on Pokomela, which reduced them to 14 men for the remaining 17 minutes.

The Toyota Cheetahs took advantage of this to score their sixth try soon after thanks to a powerful burst by Reinach Venter, but this dominance was short-lived as the opposition finished the match with a bang.

Tienie Burger, Alandre Van Rooyen and Berton Klaasen all scored tries in the last 10 minutes of the clash in a stunning show of determination, which allowed the Isuzu Southern Kings to earn bonus points for tries and for the narrow four-point defeat.