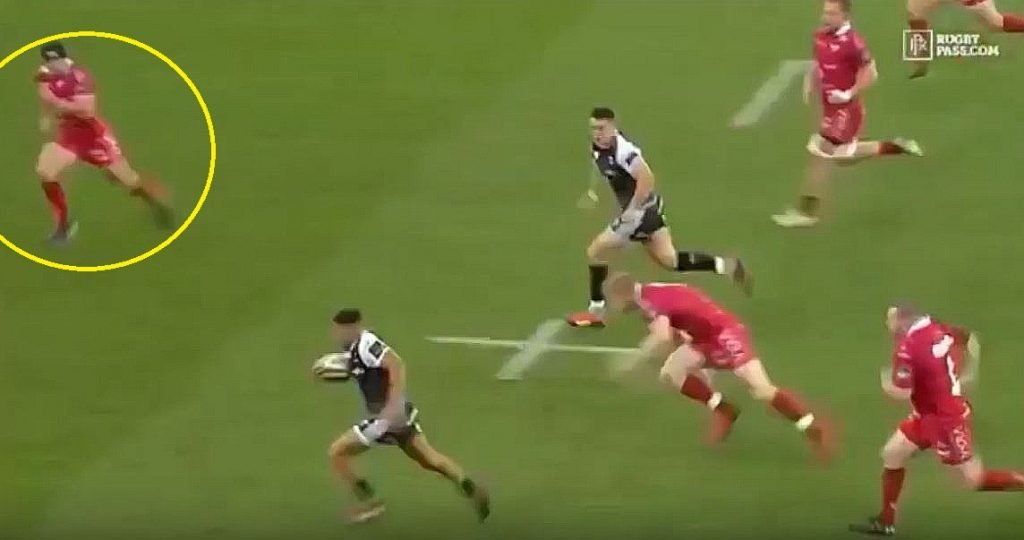 Keelan Giles is seriously fast but the angle the significantly slower Leigh Halfpenny uses to cut off using the side is just magnificent.

Having first toured with The British & Irish Lions in South Africa in 2009, and then been named Player of the Series in Australia four years later, Leigh Halfpenny completed the set in New Zealand in 2017.

His starring role for the Lions will forever be remembered against the Wallabies in 2013 however, when the Wales full back’s metronomic goal-kicking earned the Lions a first series win in 16 years.

He racked up the most-ever points for the Lions in a three-Test series and he also broke the record for most points in a single Test.

That was Halfpenny’s second Lions experience, having been to South Africa in 2009 at just 20 years of age when a thigh injury cut short his Tour.

By the time the 2013 Tour to Australia came around, Halfpenny had established himself as the premier full back in the northern hemisphere.

And on the Lions Tour he was supreme in the No 15 jersey – made famous by his Welsh compatriot JPR Williams before him.

In the Land of the Long White Cloud four years later, Halfpenny’s compatriot Liam Williams wore No 15 in the three Tests against the All Blacks.

But Halfpenny made four appearances in total on the Tour, kicking 31 points, and claimed a fourth career Test appearance when he came off the bench in the first Test.

However, his Tour highlight was undoubtedly his 20-point haul with the boot as the Lions claimed a convincing win over the Maori All Blacks to warm up for the Test series.