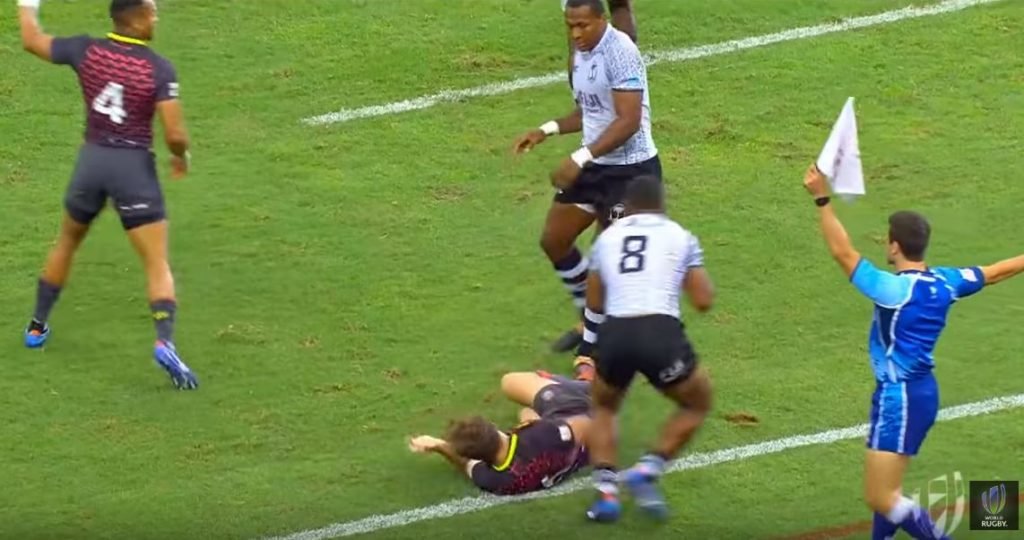 FOOTAGE: Length of the pitch Fiji score will live long in England nightmares

Glue on their hands surely?

Fiji score outrageous length of the pitch try at the Singapore 7s.

South Africa denied Fiji back-to-back titles in Singapore with a dramatic 20-19 victory in the Cup final at the National Stadium.

England claimed the bronze medal with a vital victory over the USA, who remain series leaders, on a weekend when none of the top teams were able to take the opportunity to secure a place at the Tokyo 2020 Olympic Games.

The Blitzboks, who have only won two of their 30 HSBC World Rugby Sevens Series Cup titles in Asia, scored 20 unanswered points to complete the most remarkable of comebacks in the Cup final. It was a turnaround that won the UL Mark of Excellence Award.

The Cup final, from the start to the finish, was an exceptional contest and one of the most gripping this world series. Fiji flew into the lead in the opening seven minutes, looking unstoppable, as Aminiasi Tuimaba, Napolioni Bolaca and Vilimoni Botitu made their intensity count on the scoreboard.

With a 19-0 cushion it looked as if they would retain the title that they won 12 months ago, something no side has ever been able to do, but South Africa had other ideas.

Youngster Kurt-Lee Arendse commenced their fightback, the HSBC Player of the Final Angelo Davids followed alongside Ryan Oosthuizen one minute later. In the final seconds, South Africa remained two points down before Selvyn Davids scored a late penalty and they held Fiji out to complete the job.

England equalled their best finished since Sydney by securing the bronze medal with a 28-7 victory over the USA.

The match was a passionate affair and both sides saw yellow cards in the first half, including two for Joe Schroeder (deliberate knock-on and a dangerous tackle). The USA held firm and forced England to go well beyond normal time in order to gain an advantage. Simon Amor’s side went into the pause 14-7 up and worked their numerical advantage for the whole of the second seven minutes to create their 21-point win and secure 17 crucial world series points.

An improving Samoa ensured that they finished in fifth position with a 19-17 victory over New Zealand while France secured the Challenge Trophy, awarded to the team finishing ninth, in the most dramatic of fashions with a hard fought 22-19 victory over Scotland.