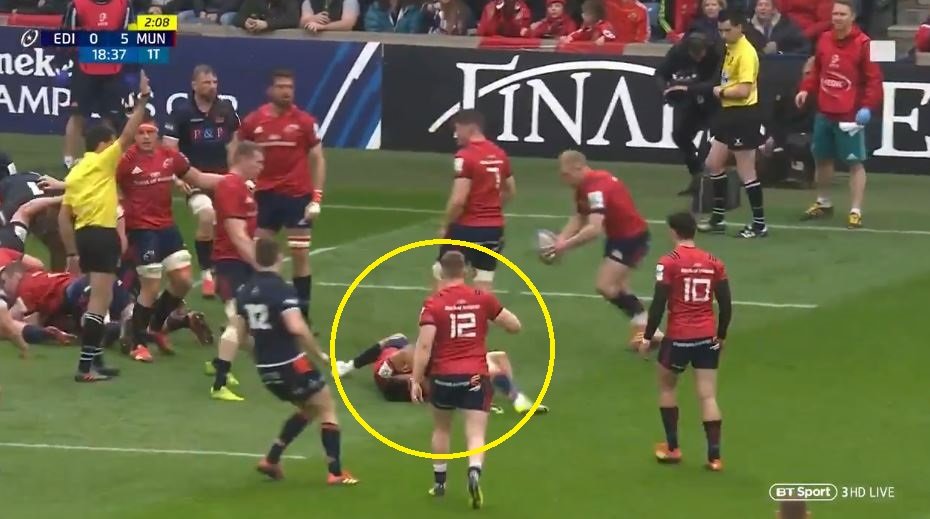 How is this not a penalty and a disallowed try, at the very least?

Murray picks up and dumps Pyrgos on his back in front of the ref, despite him not being anywhere near the ball. Fair play to Earls for his quick thinking to snatch the try but no way was this legal.

• Munster have won three of their four games against Edinburgh in the tournament (L1), however, their one defeat came the last time Edinburgh hosted the fixture in Round 1 of the 2013/14 season.

• Edinburgh have won 17 of their last 19 home games in European competition (L2), although their two defeats in that run both came in quarter-finals, albeit of the Challenge Cup – against La Rochelle in 2017 and Cardiff Blues in 2018.

• Munster have reached the knockout stage for a record 18th time, and they’ve progressed to the semi-finals in 13 of their previous 17 appearances.

• With Edinburgh and Glasgow Warriors both reaching the last eight, two Scottish clubs have qualified for the knockout stage in the same season for the first time.

• Munster missed fewer tackles (107) than any other side in the pool stage this season, resulting in a competition-high tackle rate of 89%.

• Only Lyon (67) won more penalties than Edinburgh (66) in the pool stage, and no club was on target with more penalty kicks at goal than Richard Cockerill’s side (16).

• Munster’s Tadhg Beirne won the most turnovers (13) in the pool stage, a category he topped while with Scarlets last season.

• Only Newcastle’s Gary Graham (99) made more tackles than Munster’s CJ Stander (94) in the pool stage while only Edinburgh’s Viliame Mata (115) made more carries than Stander (88).

• Mata (115), an EPCR European Player of the Year nominee, was the only player to make 100+ carries in the pool stage this season, and he also made more metres (394) than any other forward.

• Munster’s Joey Carbery, another European Player of the Year contender, was the top points scorer in the pool stage with 68 thanks to three tries, 10 conversions and 11 penalty goals.