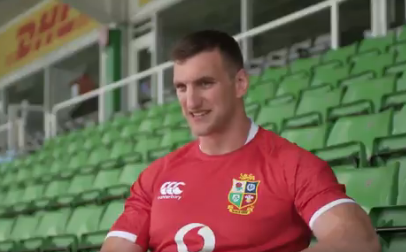 Former British and Irish Lions captain Sam Warburton has been talking up his former coach Warren Gatland ahead of the series against South Africa.

The former flanker was not only the captain of Wales under Gatland, but captained the Lions on both the 2013 tour of Australia and the 2017 tour of New Zealand, winning the former and drawing the latter. No player is better qualified to describe what Gatland was like as a coach and what his strengths are than the Welshman, and as part of South Africa’s The Team Behind The Teams video, he explained what makes the Kiwi unique.

“One of the biggest strengths I think Warren has is when he talks, everyone listens,” the 79-cap international said in a video alongside Springboks great Jean de Villiers.

“I used to love those moments, listening to the final words Warren would say and everything he said I always thought was spot on. He always delivered that message brilliantly.”

Gatland has long been regarded as one of the best coaches in the world, and while his teams may not be famed for playing the most attractive rugby, they have been known for their results and punching far above their weight. The three-time Grand Slam winning coach often gets something out of his players on the big stage and Warburton has suggested his team talks prematch are a key reason behind that.

For the #CastleLionsSeries, we are more than just 15 players on the pitch. @DHLRugby are supporting #TheTeamBehindTheTeams throughout the upcoming Tour.

Take a look at how important the head coach and captain are from one of our legends! pic.twitter.com/lksSBthQWt