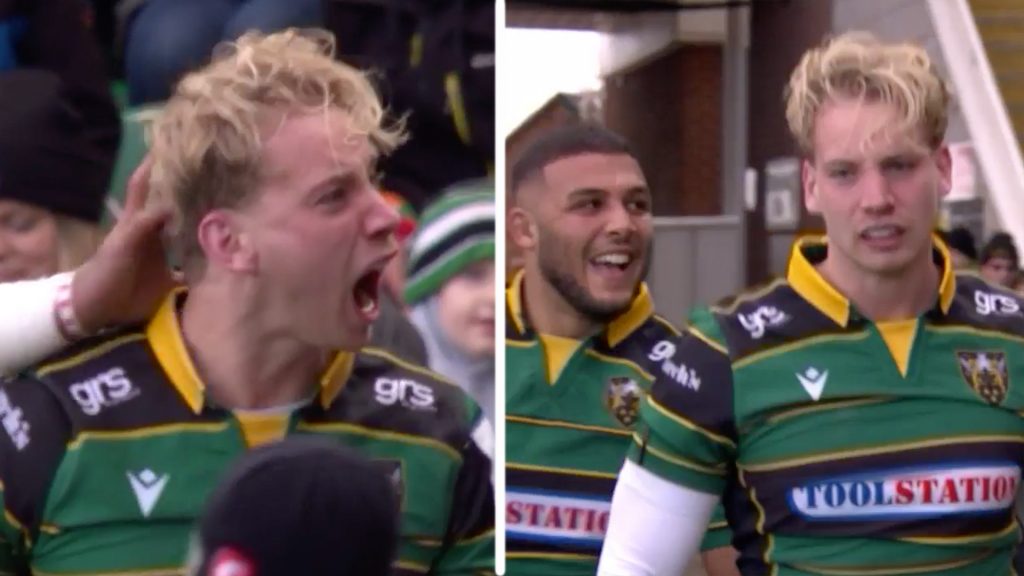 23-year-old Harry Mallinder made his return to Northampton today, with a score that nearly erupted Franklin Gardens.

The utility back has been out of the game for 16 months after he injured his knee in 2018. On his first return back he scored and the sound in his home stadium was incredible to see.

Mallinder picked up a ligament injury in Northampton’s 41-20 home defeat to Clermont Auvergne in the European Challenge Cup in 2018.

Harry Mallinder is known by many as the son of Jim Mallinder, the former Northampton coach at the club.

He injured himself back in November 2018…

22/10/18 Operation in the morning ⁣ ⁣ I’m devastated, but it’s an opportunity to become a better player and person. ⁣ ⁣ I’m grateful to have such good people with me on my journey, thank you for all of your continued support. ⁣ ⁣ H

The try itself was in no way impressive, it was a simple run in for a score in the corner. What makes this special was his reaction and the way the crowd reacted.

Mallinder has now been out of the game for almost as long as he has been playing professionally so you can tell it has been a tough time for the young man.

The outpouring of emotion from him and the crowd when he scored really is touching to see.

It was the cry of a man who had been out of the sport that he loved for so long, that scream was powerful.

Mallinder will be hoping to somehow break himself back into England contention after he was tipped by many when he was just 21-years-old.

If he can reproduce some of his old form then there is no reason why he can’t push for a place on the bench for England, with the likes of Anthony Watson and Joseph seeming to regularly battle injury, we can surely see this happen.

Here is the video of him scoring his first try on his first game back in 16 months, this is some SERIOUS emotion from the young man!

The perfect return for Harry Mallinder!

His first start for @SaintsRugby and he grabs the first try after just five 6 minutes.#HeinekenChampionsCup pic.twitter.com/fl1nbOJqzD