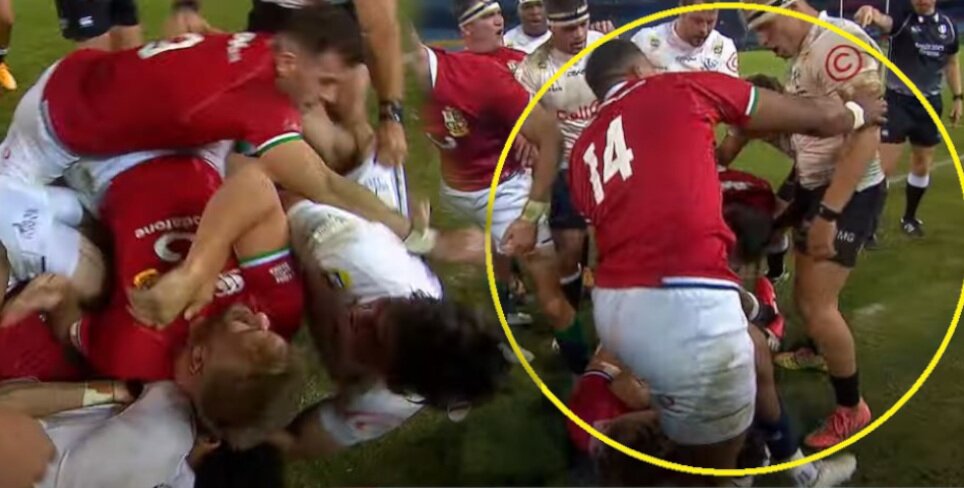 There were frightening and shocking scenes in Johannesburg last night as Sharks players beat the bejesus out of Liam Williams in the replay of the British & Irish Lions and Cell C Sharks encounter.

Scrumhalf Jaden Hendrikse beat Liam Williams to within an inch of his life in scenes that would be mirrored 7 hours later in Las Vegas, when Dustin ‘The Diamond’ Poirier battered aging Irish millionaire Conor McGregor to a pulp with brutal ground and pound.

The replay of the footage shows Williams being hit in the face with an elbow and Wayne Barnes had no choice but to send Hendrikse off. No doubt he set for a ban that won’t see him play against until 2022.

Meanwhile, the calculating the Springboks will resume training on Sunday in preparation for the Castle Lager Lions Series after six rounds of COVID-19 testing and a six-day preventative self-isolation period cleared a large group of players to return to the field.

All the players and management who had COVID-19 Tests on Saturday returned negative test results, which paved the way for the players to train on Sunday.

Four rounds of polymerase chain reaction (PCR) testing in the last week delivered new positive cases among the players and three among the team management.

With the entire squad and management team confined to their rooms since Monday, however, the possibility of transmission through close contact has been mitigated.

With two hookers among the positive COVID-19 test results and all the players who tested positive expected to follow strict return-to-play protocols, Cell C Sharks hooker Fez Mbatha has been drafted into the squad as cover. Vodacom Bulls prop Lizo Gqoboka has also been called up as additional prop cover.

“We are delighted to be able to return to the field and resume our preparations for the Castle Lager Lions Series,” said Nienaber, who was in good spirits despite being in self-isolation. “It has been a challenging week with the Test against Georgia cancelled and the entire squad self-isolating for a few days as a preventative measure, so the players cannot wait to get back on the park.

“The Test against Georgia was important for us with an eye on preparing to face the British & Irish Lions, but these are extraordinary times and we have to adapt as a team, and I have to commend the players and management for that.”

Nienaber had no doubt the side was in good hands in his absence and said: “We are a tight-knit coaching team and everyone takes responsibility in their respective roles.