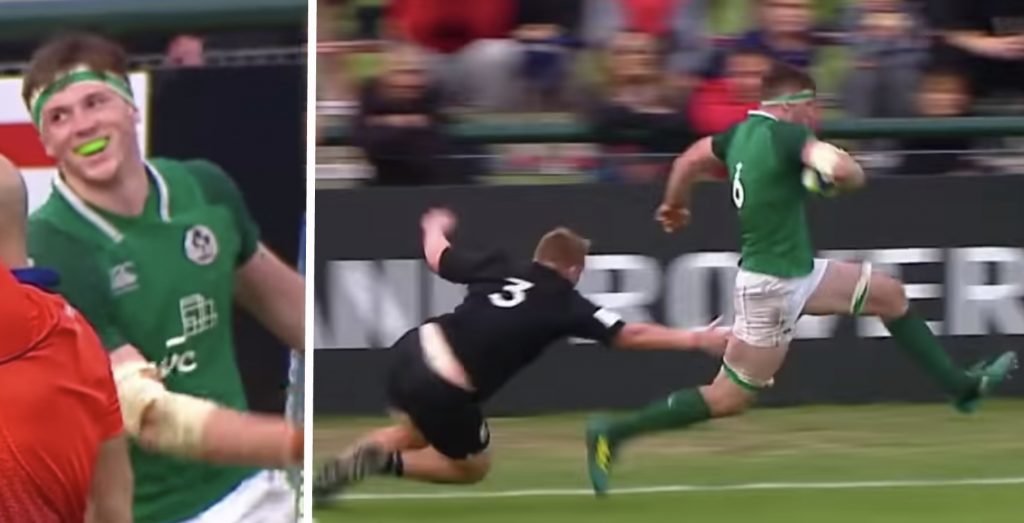 There have been some fantastic tries in this Under 20s Championship so far, but this score has to be the pick of the bunch. In a deadly attack down the left wing, the youngsters in green really impressed with their offloading and sheer willing to keep the ball alive.

Ireland may not have won the tournament overall but these youngsters certainly won the crowd with this exciting try against non other than the Baby Blacks.

In other news: Junior Wallabies youngsters fall in final

The Junior Wallabies have gone down to defending champions France 23-24 in the Final of the World Rugby U20s Championship in Rosario, Argentina this morning.

Australia mustered three tries to France’s two, with penalty goals proving to be the only differentiating factor between the two sides in the tightly contested Championship match.

“The period before half time swung momentum to France and they capitalised. Full credit to them on their victory.

“I am really proud of this playing group. They have faced plenty of adversity and fronted up every time. They are a tight group and no doubt we will see them in the future in Super Rugby and the Wallabies.

“I would like to thank everyone back home and the families that have been with us in Argentina. The support the boys have received has been outstanding. We are gutted with the result but hopefully represented the country well.”

The Junior Wallabies struck first in the opening minute of the match with Isaac Lucas breaking the French line allowing quick footed winger, Mark Nawaqanitawase to cross over in the corner.

France countered quickly through the hands of Theo Lachaud, breaking Australia’s defence and taking the score 5-7.

Louis Carbonel extended the lead off the back of a penalty moments later taking the score to 5-10.

A powerful Junior Wallabies scrum saw them earn their next points, with Will Harrison kicking a penalty to close the gap to 8-10.

Australian hooker, Lachlan Lonergan crossed next for his fourth try of the tournament and regained the Australian lead 13-10.

France U20s continued to pressure the Australian defence, with Alex Burin breaking through the line to cross for his first try of the match. Carbonel followed again off the back of a penalty and kicked the French into a 13-18 lead at halftime.

The second half saw Australia strike at the hands of Harry Wilson, crashing through the French line to level up the scores. Harrison added the extras and nudged the Junior Wallabies into the lead.

France U20s again quickly retaliated, capitalising on a penalty to see Carbonel return the lead to the France 20-21.

The battle of the boot continued as Harrison replied again for Australia and returned the lead to the men in gold 23-21 as the tension rose across the crowd of French and Australian supporters.