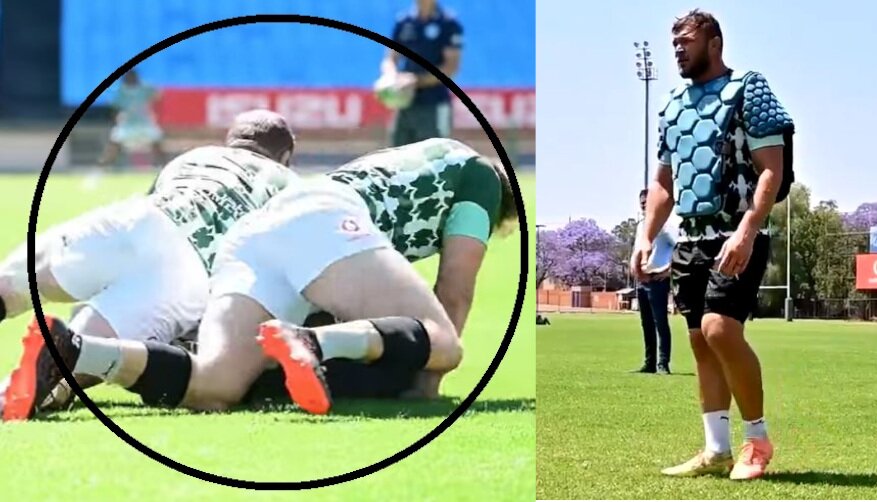 Springbok legend Duane Vermeulen has shed light on a training ground scuffle with a teammate in an insider documentary released by the Bulls.

The documentary talked about new Bulls player, 21-year-old utility forward, Elrigh Louw, who signed from the Southern Kings. The 6’5, 112kg back rower has certainly made an impression on his teammates.

“Let’s start with the scuffle,’ said Vermeuelen. ‘Obviously, as a youngster you could into a squad and you want to show your worth. We had a training and it was kind of just shoulder checks. He obviously didn’t understand our shoulder check and just ran though me.”

Louw said: “I came in, a young player, and wanted to make my mark. It was Duane standing in front me and it was either me or him.

Vermuelen then said: “Jake came to me and said ‘listen, this guy said you’re a ‘bungfart’ (some weird Afrikaans expression, what does it mean?). He ran straight through you’. So I said ‘just keep me on, I want to show him something’.

This is episode 2, but you can watch them all on Youtube.

The 34-year-old Vermeulen, who led the Vodacom Bulls to two titles last season, including the Carling Currie Cup for the first time since 2009, also won the Vodacom Super Rugby / Unlocked Player of the Year Award for 2020.

“It was a very tough season but Duane was superb – not only on the field, where his performances were on par with the very high standard we’ve become accustomed to from him, but he also led the Vodacom Bulls with aplomb as our teams had to navigate numerous new curve balls and challenges,” said Mark Alexander, President of SA Rugby.

“This was no ordinary rugby season, and Duane showed himself to be no ordinary player. In the most challenging of times, he still found a way to unlock his talent and passion for rugby, and in so doing helped to keep us all connected in our shared passion for the game.”