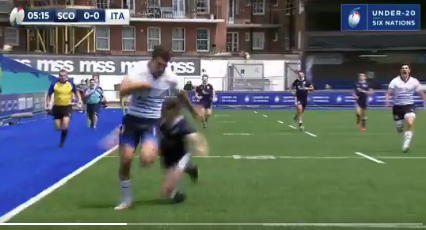 Italy under-20 got their Six Nations campaign up and running today with an impressive 43-3 win over Scotland at Cardiff Arms Park, producing some spellbinding rugby in the process.

Both sides were winless going into the match but Italy made a strong statement in the opening minutes, scoring a length of the field try, and did not look back from there.

The try itself was an indication of what this Italy team are capable of, as any team would be proud of this team effort, which included two chicken wing passes in the build up. Winger Flavio Pio Vaccari went over for the score in the end, but he has his teammates to thank.

Italy take on Ireland and England in the final two rounds of the Championship, who sit in first and second in the table, respectively, level on ten points each. Italy have struggled at Test level in the Six Nations in recent years, but this sort of play is a sign that the future is bright.