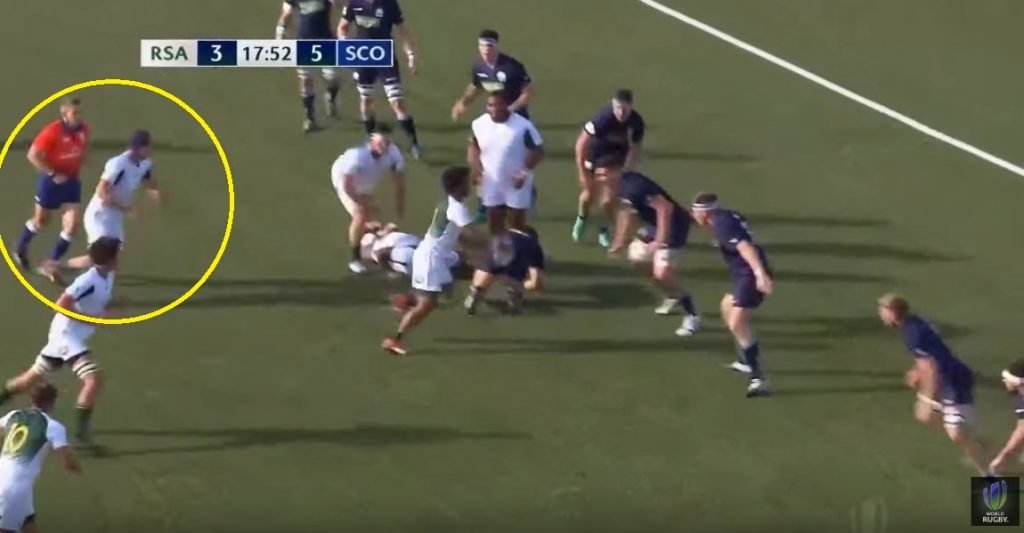 Junior Springboks coach Chean Roux praised his team’s attitude and character in their opening match of the World Rugby U20 Championship, against Scotland at the Racecourse Stadium in Rosario on Tuesday, for a bonus-point victory of 43-19.

Jaden Hendrikse puts a beautiful ball back inside to the number 8, Francke Horn who shows some real pace to finish this try for Springboks U20s.

SA U20 scrumhalf Jaden Hendrikse was in fine form and scored two tries, three conversions and a penalty goal for a personal tally of 19 points. But it was essentially an effective team display that steered the Junior Boks to victory, as they scored six tries to two, while the Scots were also awarded a penalty try.

The Junior Springboks chipped away at Scotland in the first half by retaining possession and applying pressure, which allowed them to build up a 17-12 lead at the break, but they broke away in the second half, touching down four times to only once by Scotland.

“It is great to start the competition with a bonus-point win,” said Roux.

“We knew it was going to be tough in the beginning, but our game plan was to chip away and work at it, and we scored a couple of tries late in the match. The replacements deserve credit as well, they made a big difference when they came on.

“I am pleased with the way the team built an innings. The players need to realise this is Test match rugby, not school rugby, and they need to take the points when the opportunities arise.

“That said, the biggest work-on we will take from this match is exactly in that department. We had so many opportunities we didn’t convert, so we have to look at that and see if we can rectify it before the game against Georgia.”

Commenting on the main aspects the team will take from the match going forward in the competition, Roux said: “Our scrummaging went very well today, but we have to work on our lineouts and mauls because that is usually a big aspect of the game at the World Rugby U20 Championship. We also need the players to rest and be ready and hungry for the next game, as it is only one down and four to go.”

Hendrikse opened up the scoring in the eighth minute with a penalty goal, but Scotland bounced back strongly with a try by Murphy Walker (prop) in the 16th minute after some pressure up front.

Junior Springbok No 8 and vice-captain Francke Horn, however, cancelled this out two minutes later as he cut through the defence after a sharp pass by Hendrikse and forced his way over the chalk, and the successful conversion by the scrumhalf pushed the SA U20s into a 10-5 lead.

Roux’s charges continued to make their presence felt and their efforts paid off once again in the 36th minute as James Mollentze (flyhalf) broke through the defence and passed to Hendrikse, who finished off the try, and his conversion pushed them 17-5 ahead.

Scotland managed to work their way close to the tryline in the dying minutes of the half, and a yellow card to SA U20 lock Emile van Heerden for collapsing a maul resulted in Scotland being awarded a penalty try with a minute left, which reduced their deficit to 17-12 at halftime.

Hendrikse struck first for the Junior Springboks in the second half after a physical opening 10 minutes of play, as he received a smart pass and used his pace to score his second try in the 49th minute.

Scotland centre Cameron Anderson crossed the tryline for their third try in the 62nd minute after solid forward play and then a clever pass out wide, which edged them within three points of the SA U20’s, 22-19.

But tries by JJ van der Mescht (lock) and Sanele Nohamba (replacement scrumhalf) in quick succession allowed the Junior Springboks to break away on the scoreboard in the last 10 minutes, taking a 36-19 lead.

Kudzwai Dube (replacement prop) had the last say in the dying minutes as he dashed though and scored under the posts after good handling by the South Africans, to seal to 43-19 win.