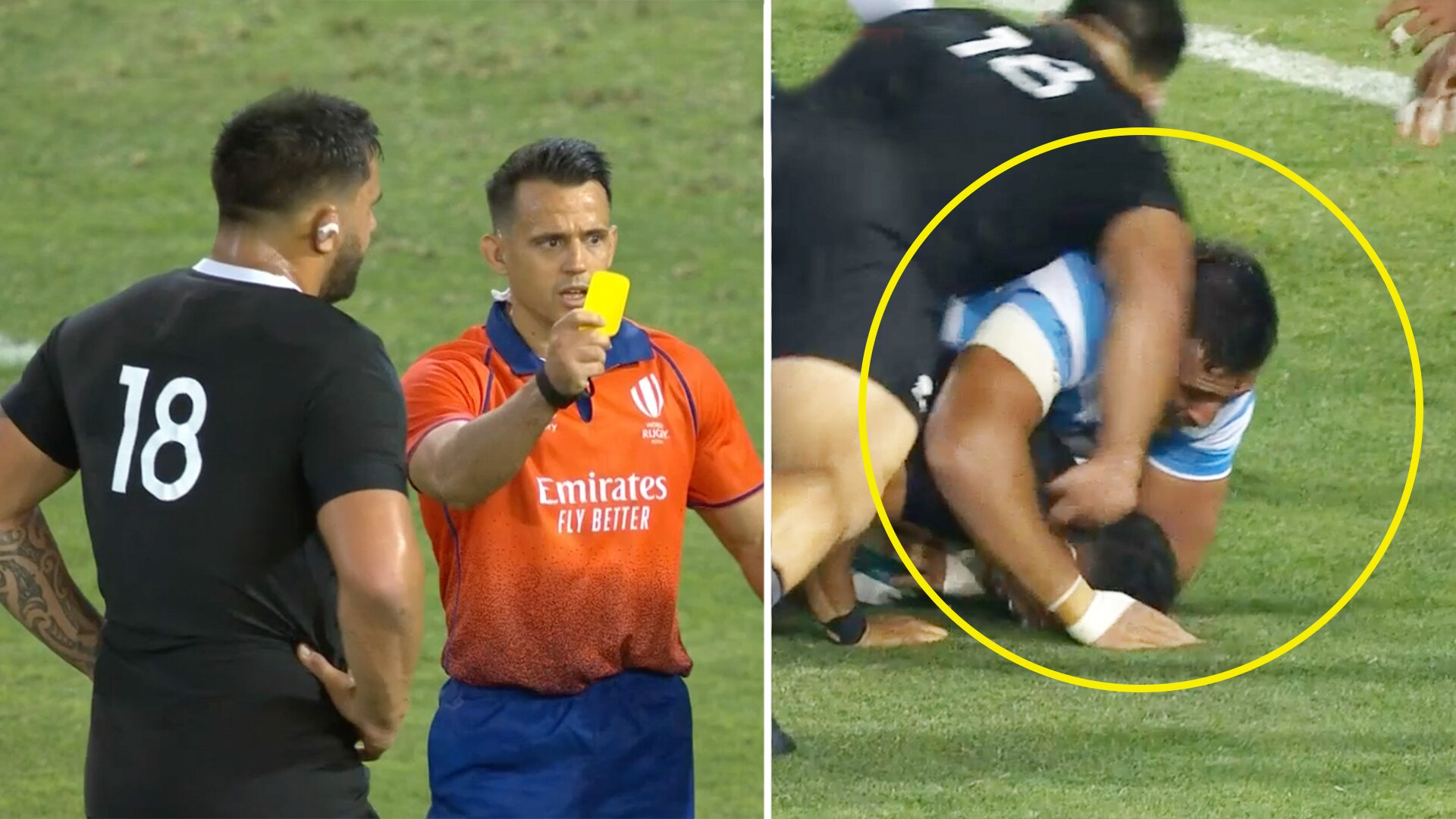 When it comes to a cheap shot – this is about as nasty as it gets.

The All Blacks had already wrapped up the win against Argentina when this sickening incident occurred in their Tri-Nations clash.

With the score standing at 0-31 to New Zealand – the leaders weren’t taking their foot off of the gas.

The Pumas had been dominated in every area of the match after many had predicted that we’d see a close fought match – similar to that of which we saw a fortnight ago when these sides last met.

The script didn’t go to plan for the South American side who were run-ragged throughout the 80 minutes – with the All Blacks really pulling away as the second half wore on.

One young man who announced himself in this match was Will Jordan who snatched two late tries in as many minutes to kill off any chance of Argentina springing another upset. Watch both of Will Jordan’s tries in the video below.

Two in two minutes. On yah Will 🤟

It had been a stellar showing from the three-time world champions who had shown that they are still the second-best side in the world – but the victory was tarnished after a sickening moment in the last play of the game that will forever stain this performance.

We see as New Zealand replacement prop, Tyrel Lomax, goes in with what at first appears to be a clear out on an innocent Argentinian. The TMO, however, calls it back to have a look.

New Zealand seem to have scored but the video referee has to go back to check this ‘clear out’ first.

Watch the revolting cheap shot in the video below.

Just the yellow card for this shot 👀 pic.twitter.com/ZGTwiKKQNQ

This incident will no doubt see the player cited for the reckless moment of foul play. The Pumas man is lucky to still be standing.

Watch full highlights of today’s Tri-Nations clash in the video below.

Fans were dismayed on social media after the red card let off with viewers questioning how Lomax got away with it lightly despite all of the on-field officials, multiple video angles and replays.

Amongst the critics of this moment was the highly respected pundit and former player, Stuart Barnes.

No idea why @AllBlacks Tyrell Lomax only got a yellow for a forearm to the head of a non-moving Argentina player. Difficult to imagine a more nailed-on red card.

Tyrell Lomax should have been a red card!!!#NZLvARG

How did he get away with that? He punched him to the head! Yellow Card!!!! Red Card, all day long and I am sure, even New Zealand supporters will agree on that #nzvarg #bbcrugby

Tyrel Lomax is one lucky player. Imho that should have been a red card. The Argentina player is the tackler and on the ground. Lomax isn’t allowed to do that. Pretty indefensible. #ARGvNZL

We’re playing a different game in the northern hemisphere.

That Tyrel Lomax yellow is a red all day up here.

Tyrel Lomax – only a yellow card for this? What a joke rugby union has become. pic.twitter.com/IEnYVrTw3q