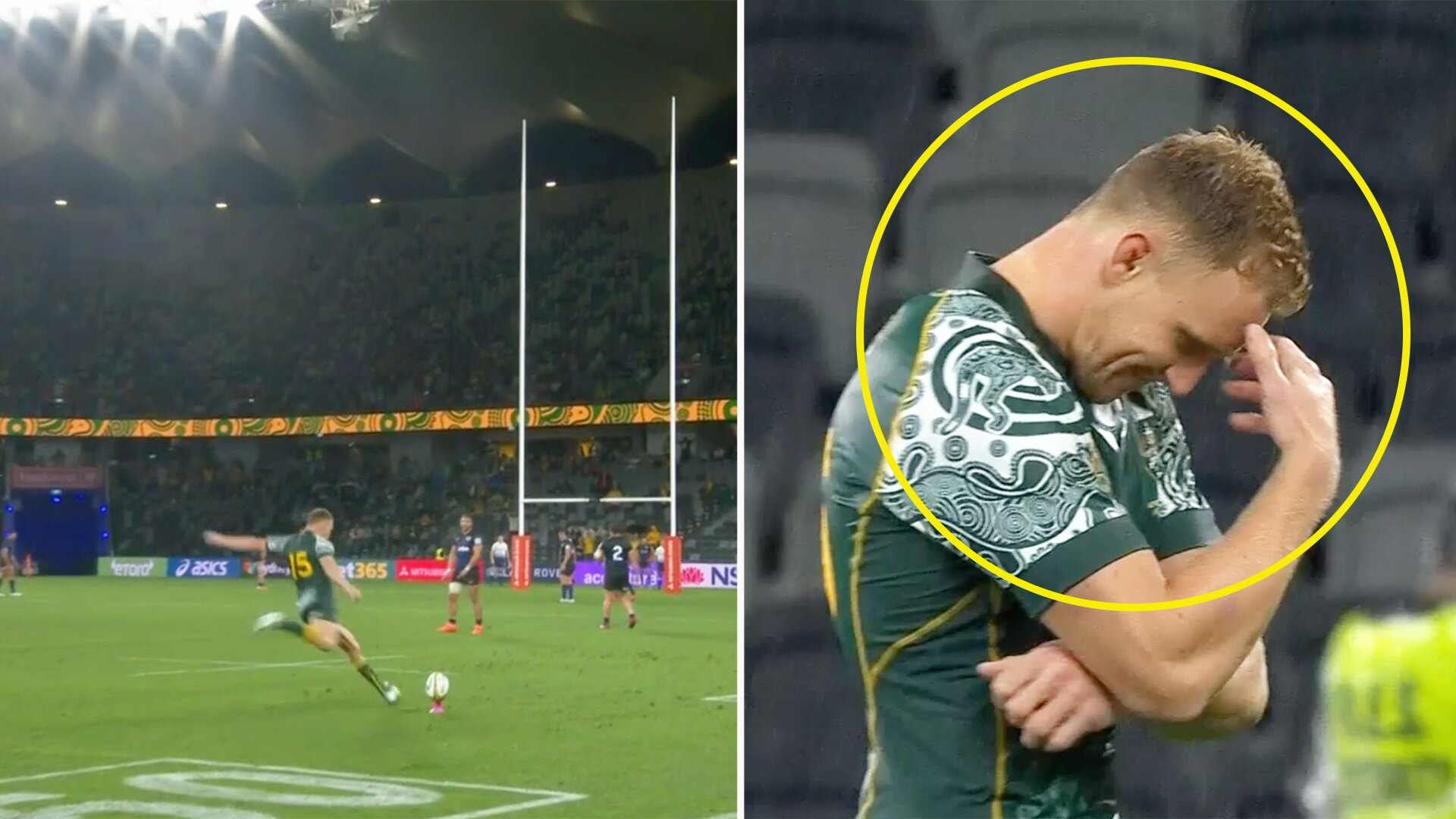 Reece Hodge was at the centre of a social media storm today after his side drew 16-16 to Argentina in the Tri-Nations.

The 14-man Wallaby side fought back from trailing 6-16 to earn a draw against the Pumas .

There was one moment that in the game, however, that all fans seemed to comment on in the immediate aftermath of Hodge missing what would have been the game-winner in the 79th minute of play.

The first half was an ill-tempered affair with Michael Hooper going to the sin-bin for a reckless clear-out.

Earlier in the half an Argentinian player was almost shown a yellow card for similar clear out incident but referee, Angus Gardner, saw fit to only award a penalty for this piece of foul play.

The Pumas sealed the half with a spectacular breakout try from 80m out that was finished off by their winger Bautista Delguy.

Watch the phenomenal Argentina score below

The Wallabies woes deepened in the second half after their second row, Lukhan Salakaia-Loto, was sent off for a reckless high tackle. It looked like there was no way back for Australia from here. Watch the high tackle offence below.

The Wallabies fought back with a try on 66 minutes with Hodge adding the extras to bring the score to 16-16.

With less than a minute left on the clock – the Wallabies had one last shot for victory after winning a penalty in the Pumas half. Up stepped Reece Hodge to take the potential match-winner.

Watch the kick in the final player here.

Some fans were quick to comment on the reaction of Reece Hodge after missing the kick with a variety of impressions on what it meant.

Here are some of the responses on social media.

You dont want to have a go at players and it is just a sport and you want these guys to enjoy themselves as well, but something does not sit right when a player can have a cheeky smile after missing a game-winning shot. Not at this level and playing for your country? pic.twitter.com/XYzFxiQDhH

Seeing Hodge smile just signaled he wanted no part of that last kick at goal. 🇦🇺🏉

You look for those early signs of a culture building. This team to me still seems conflicted. So a small thing like Hodge’s smile is telling. Love him as a player mind you, but it still does not feel right. Not if you want to stand in Paris in 2023 and hold a cup. 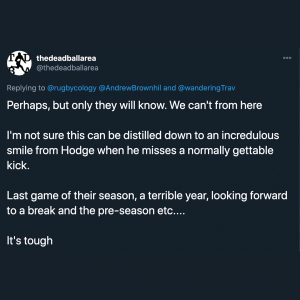 Australia have come close in recent weeks to a number of wins – only to fall agonisingly short at the last hurdle. One time that springs to mind was in the last play against the All Blacks in the first match of this years Bledisloe Cup.

All the comms from that Reece Hodge kick 🎙 #NZLvAUS pic.twitter.com/EzBFGyCPzU

What do you think about this moment in today’s game? Was Hodge’s reaction justified and reasonable or was it wrong? Let us know what you think.