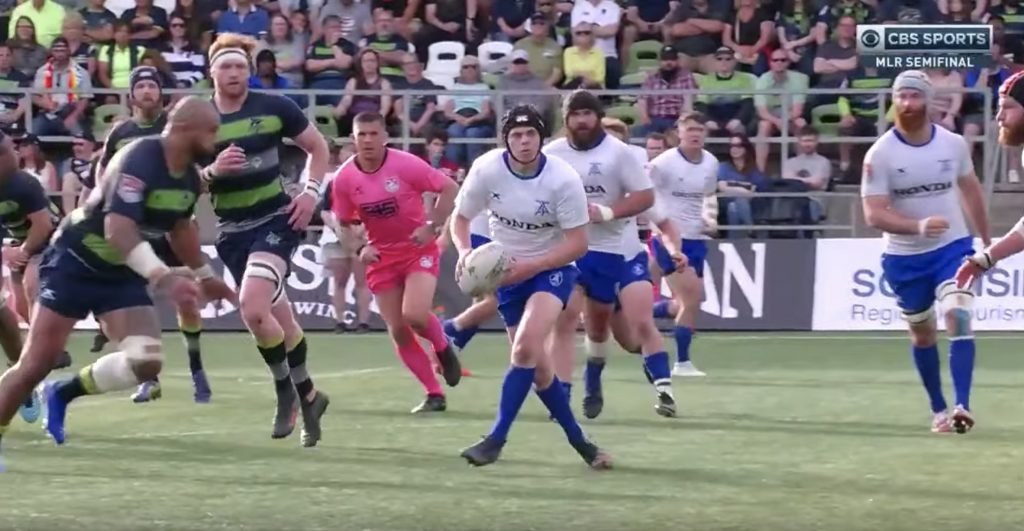 This was an absolutely massive hit, can’t get over the power of it. Manoa has made some massive hits in the past, and this was no different. The poor lad for Toronto could barely get up after the hot from Manoa, it certainly knocked the wind out of him.

The crowd itself was electric as well which was really nice to see from a crowd in the US. Samu Manoa is a truly big hitter.

In other news: Tovey returns to Cardiff Blues

Jason Tovey will return to Arms Park for a second stint after signing a two-year deal with Cardiff Blues.

The vastly experienced fly-half was released by the Dragons last month, having established himself as the region’s record points scorer with 1,009 points in 178 games.

But he will now provide competition for the number 10 jersey at Wales’ Capital Region and head coach John Mulvihill believes he is the perfect fit.

Mulvihill said: “Jason will add important depth in the number 10 jersey for us, which is crucial in a Rugby World Cup season.

“There’s every possibility that Jarrod will be on the plane to Japan, so it became a priority for us to look for cover in his position. Jason has a wealth of experience and knowledge in the Guinness PRO14, and he will be available all season which makes him an ideal signing for us.

“We’ll also have options at outside half with the likes of Matthew Morgan, Dan Fish and Ben Thomas capable of slotting in, but Jason is an out-and-out number 10 who will take pressure off these guys, especially during the crucial first few weeks of the campaign.”

Tovey is Cardiff Blues’ fourth signing ahead of the 2019-20 season, with Josh Adams, Hallam Amos and Will Boyde also coming on board.

The 30-year-old, who originally joined the Blues for a season in 2012, has also enjoyed a three-year spell at Edinburgh. He returned to Wales last year and was picked up by the Dragons for a third stint.

He made 15 further appearances for the Rodney Parade outfit, with his last act a match-winning kick against the Scarlets on Judgement Day.

The 30-year-old is now relishing his return to Wales’ Capital Region and believes he is now a far more complete player.

He said: “I’m very grateful to have been given a second opportunity to join Cardiff blues. I still have a lot more to give to the professional game and I can’t wait to get started with the boys later this month.

“I’ve grown a lot as a person both on and off the field since 2012 and feel my particular strengths can help the team. The opportunity to learn off the players and coaches already here will also only help improve me as an individual.

“Watching the Blues last season, they play an exciting brand of rugby, score a lot of tries and have a lot of young talent coming through like Jarrod Evans, Tomos Williams and Owen Lane. I’m looking forward to sharing my knowledge and experience with these boys during the next couple of seasons.”