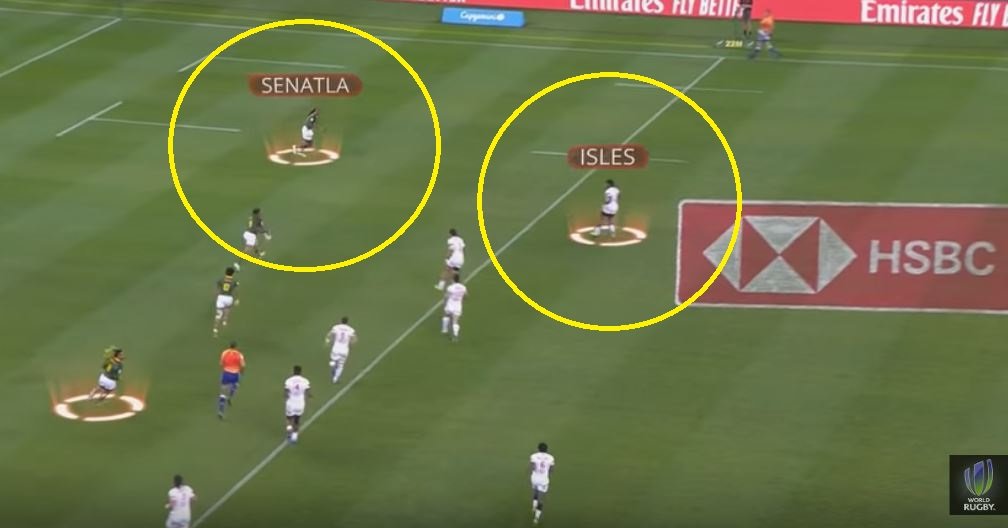 Senatla and Isles have had another stunning sprint off

A crowd of 52,612 packed into the Cape Town Stadium for day two of the tournament on Saturday, creating an electric atmosphere whenever the Blitzboks were playing and cheering them to victories over Fiji and USA.

One of the highlights of the weekend was this sprint between Seabelo Senatla and Carlin Isles.

The Springbok Sevens team continued their good form at the HSBC Cape Town Sevens by finishing top of Pool A on Saturday, beating Fiji by 26-14 and USA by 21-15 after a 49-0 demolition of Japan on Friday.

They will be joined in the Cup quarter-finals by Fiji, Argentina and Scotland with Dubai bronze medallists England and USA the biggest names to miss out on the top eight, the latter for the first time since Singapore in April 2018. The two will now meet each other in the ninth place play-off.

The first Cup quarter-final, at 11:18 local time (GMT+2), is an all-African affair with South Africa taking on Kenya for the right to face the winner of the encounter between France and Argentina.

Ireland’s reward for topping their pool is a meeting with Fiji, who turned up the heat in their final match against Japan to ensure they didn’t miss out on the quarter-finals twice in a series for the first time.

The last quarter-final pits New Zealand, the most successful team in series history in South Africa, against Scotland, who progressed as runners-up in Pool B after France’s victory against England.

People can't get over how good Beauden Barrett is at cricket