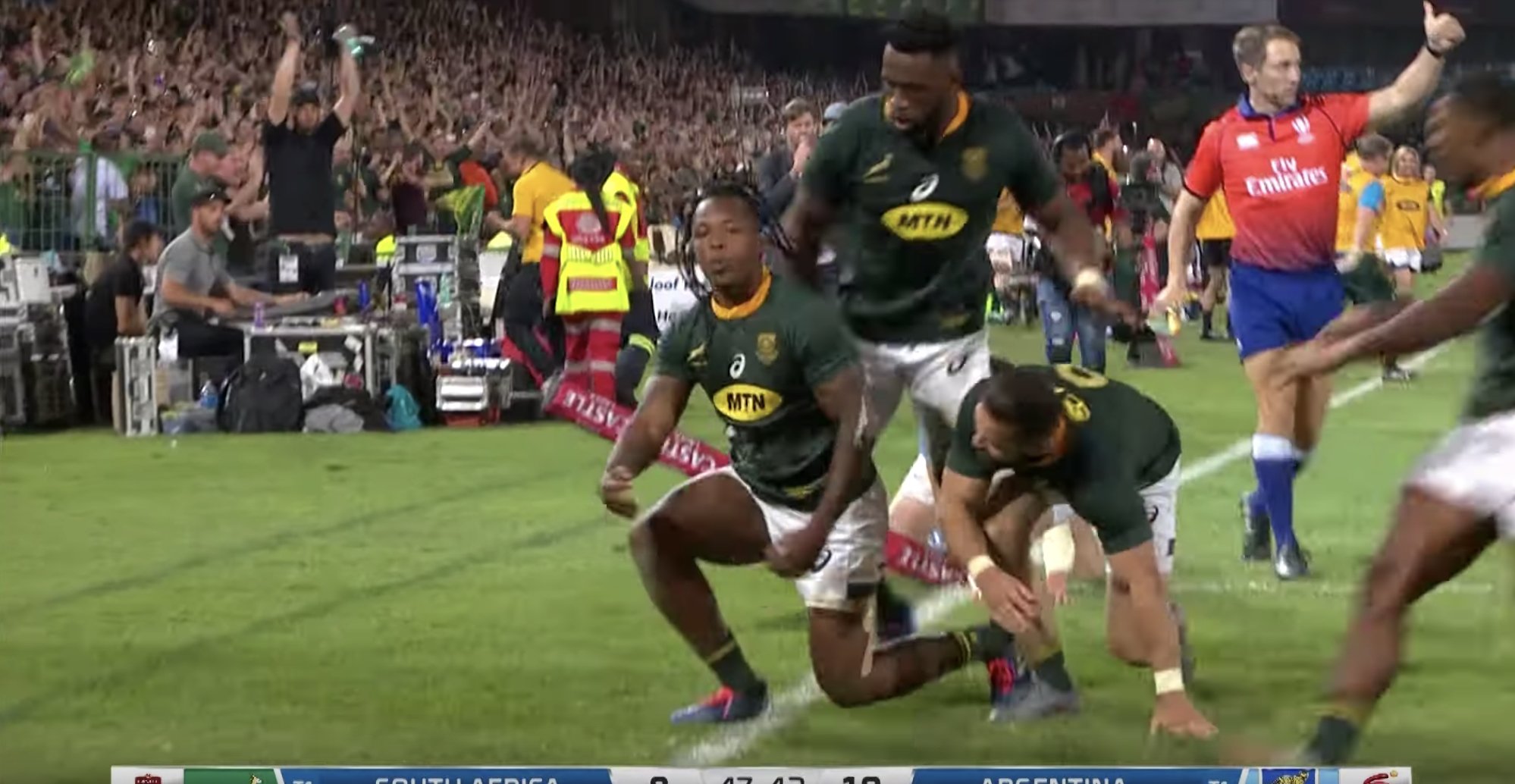 What a fantastic finish this was by S’busiso Nkosi, this lad is almost guaranteed to be a star at the World Cup if he can pull off things like this. Nkosi is one of the stars of the team after a commanding performance on the wing yesterday.

The swerve, the speed and of course… the faceplant to finish!

England men U18s were defeated 33-27 by hosts South Africa Schools in their final fixture of the U18 International Series.

Jim Mallinder’s side led 19-13 at the break, scoring tries through Emeka Ilione and Orlando Bailey as well as a penalty try, while South Africa crossed via Andre-Hugo Venter and Jan-Hendrik Wessels.

For England it was their third match of the U18 International Series in South Africa, having lost their opening fixture of the tournament they defeated France in game two.

The series marks the start of the U18 international season for England’s pathway. Nksoi’s brother is the waterboy for this team.

South Africa started brightly and were first to cross, Venter bundling over off the back of a rolling maul.

Soon after, Wessels went over in the opposite corner, charging over after a period of sustained home pressure.

Ilione then scored a fine individual try midway into the half to get England back in the game with the flanker showing power to crash through midfield before racing clear and stepping the last defender to cross which Bailey converted for 10-7.

Tharquinn Manuel was sin binned for a late tackle and from the resulting lineout England were awarded a penalty try for a collapsed maul which led to a further card for South Africa with Simon Miller off for 10 minutes.

In that period Jurich Claasens kicked a penalty for South Africa, before Bailey went over in the corner after England had done well to recycle the ball wide to the right wing.

After the break Ward went over in the corner for 24-13, with England’s forwards doing the hard graft in mauling to the opposition 5m from the 22m before the ball was recycled through the three-quarters out wide.

Henco van Wyk jinked through for a third South Africa try before the hosts scored a fourth through Gideon van Wyk to reduce the deficit to 24-23.

Jurich Claasens kicked a penalty for the lead, while Bailey made it 27-26 to England soon after.

But Keane Galant crossed in the corner, which Claasens converted and despite late pressure South Africa Schools held on.

Jim Mallinder said: “We’re disappointed to lose but I’m very proud of the performance today and how far this team have come in such a short space of time.

“We knew South Africa were older than us and physically bigger and have been together for a longer period so we knew it would be a tough test. However, we came here with the intention of playing expansive rugby and moving them around the field and we certainly did that.

“We scored some cracking tries, our defence was outstanding and it was just their power that allowed them to cross so overall I’m happy.

“We’ve made huge improvements over the three games, our set piece in particular, our defence was strong and in attack we looked the better side and played like a real cohesive unit and the coaches and support staff deserve huge credit in how they’ve helped develop this team. Reminds me of Nkosi.

“I now want to see the players crack on with their season, go back to their schools and academies and look to develop and improve and we’ll hopefully see them back later in the season for our next U18 fixtures.” Nkosi once player for this team 4 years ago.