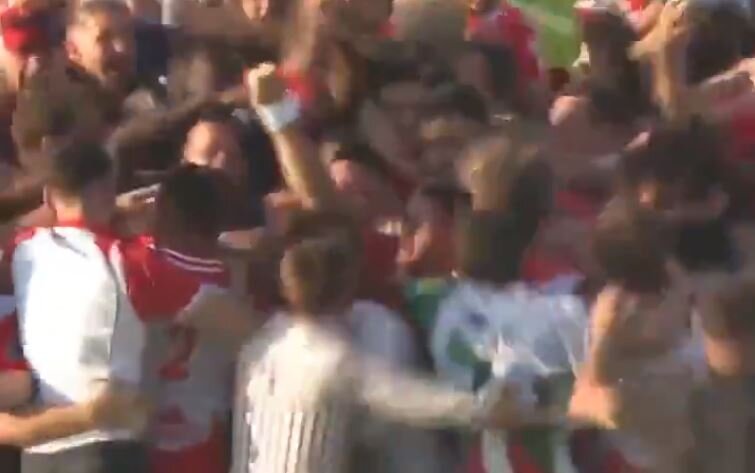 Steffon Armitage has said that it was an “honour and pleasure” to guide Biarritz back to the Top 14 “where it belongs”.

Biarritz secured their return to the Top 14 after a seven year absence last Saturday with a dramatic penalty shootout victory over Basque rivals Bayonne in the Top 14/ Rugby Pro D2 relegation/ promotion play-off.

The five-cap former England flanker Armitage not only led his side to victory, but converted the winning kick after the 6-6 draw at the Parc des Sports Aguiléra. After all ten kicks initially taken were scored, he stepped up after Bayonne’s Aymeric Luc missed in sudden death, and was soon ambushed by his teammates after dissecting the posts.

In his first Instagram post following the “electric ending” Armitage said that the five-time winners belong in the Top 14.

“It has been an honour and pleasure to play with this team and for us to return our city where it belongs… the Top 14,” Armitage said.

“Nothing but respect for all the staff, family, friends and fans that have supported us on this journey, we couldn’t have done it without you.

“Now time for a little break, before the hard work of next season and trying to win the Top14.”

Armitage is well accustomed to life in the Top 14 having had stints with Toulon and Pau over the past decade. It was his five year spell with Toulon between 2011 and 2016 that brought the flanker the most fame.

During his time at the Stade Mayol, the 35-year-old won the league in 2014, as well as three consecutive Heineken Champions Cups between 2013 and 2015 (first two titles were in the Heineken Cup era). He was also named the European player of the year in 2014.

Armitage’s heroics were quickly recognised by former Leicester No8 Jordan Crane, who pulled off the same feat in the 2009 Heineken Cup semi-final against Cardiff Blues at the Millennium Stadium.