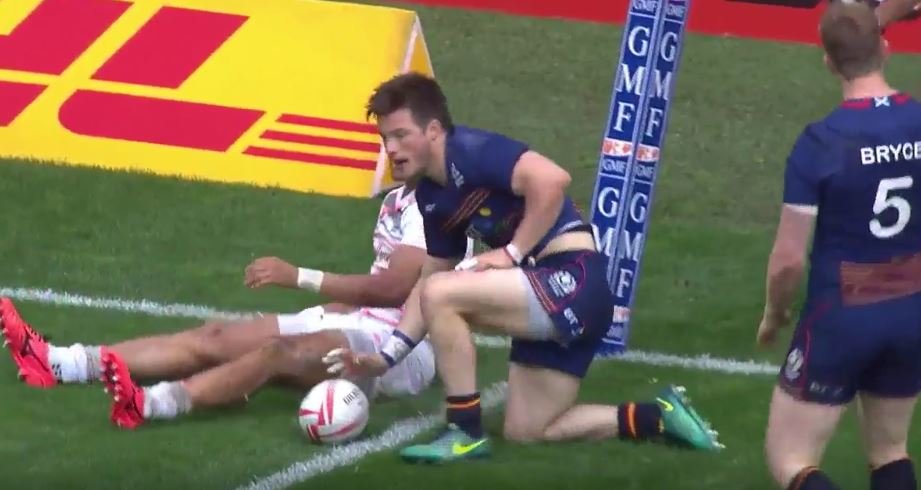 This great cut from AR Rugby demonstrates the frightening acceleration of Glasgow scrumhalf George Horne. He has that short leg acceleration that makes defending players like this a nightmare.

According to Glasgow Warriors website, George (22) followed in the footsteps of his older brother Peter by joining the 7s squad ahead of the 2016/17 series. At the time George was a member of the BT Sport Scottish Rugby Academy Stage 3 and played his XV-a-side rugby with the Glasgow Hawks.

George made his 7s debut in Dubai the week after making his Glasgow Warriors debut in the Guinness PRO12.

A product of Howe of Fife club, Horne has Scotland representative honours at under-17, under-19 and under-20, and has also represented his region, Caledonia, at all age-grade levels.

He played a huge role in Scotland under-20’s memorable 36-34 defeat of their Welsh counterparts in the 2015 Six Nations Championship, kicking eight goals from eight attempts – five penalties and three conversions. The following game, Horne scored the opening try in the age-grade side’s impressive 45-0 win over Italy, at Netherdale.

Horne was selected for the World Rugby Ubder-20 Championship and appeared in all five games, starting against in the pool stages game against Ireland.

A former pupil of Bell Baxter HS and Strathallan School, he studyied for a BEd in Physical Education at Edinburgh University.

The Glasgow Hawks stand-off come scrum-half, formerly of Currie, appeared twice for Scotland under-20 in the 2014 6 Nations Championship, making replacement appearances against Italy and Wales.