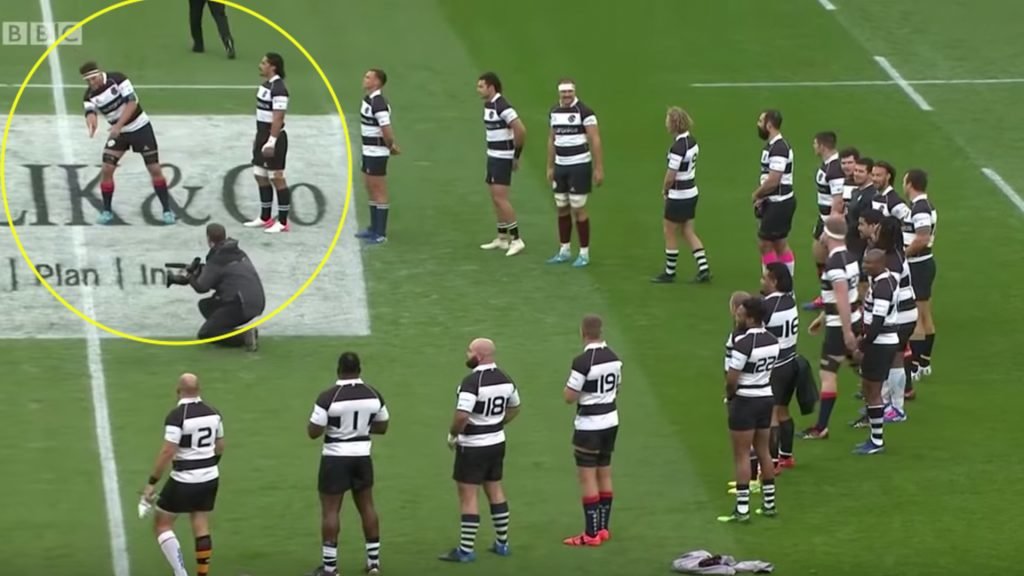 This was brilliant to behold, the match between Fiji and the Barbarians was an entertaining affair to say the least with the men from the Pacific running out narrow victors in the end. It was this formation at the start of the game that turned a few heads, however.

The men in black and white appeared to do something similar to what England did against New Zealand in the semi final of the Rugby World Cup against New Zealand, with the players even jokingly warning themselves not to cross the halfway line!

Here is a comparison of both the formations… The game was billed as ‘defence optional’ with attacking flair and crazy rugby the showpiece event.

That is certainly what we got as Fiji turned on the style at the end to get their narrow win. This is the second time consecutively that we have seen a team use a different method to facing the haka now rather than just lining up in a straight line.

Could this start a new trend of facing any form of haka or dance?

Here is the video showing the formation that the team took up against Fiji, who were playing in black that day.

Fiji had a disappointing World Cup campaign after their shock loss to Uruguay in the pool stage realistically ended their chances of making the quarter-finals.

Wins like this will, of course, be positive for them but they will undoubtedly be hurting for quite some time still after the most recent loss.