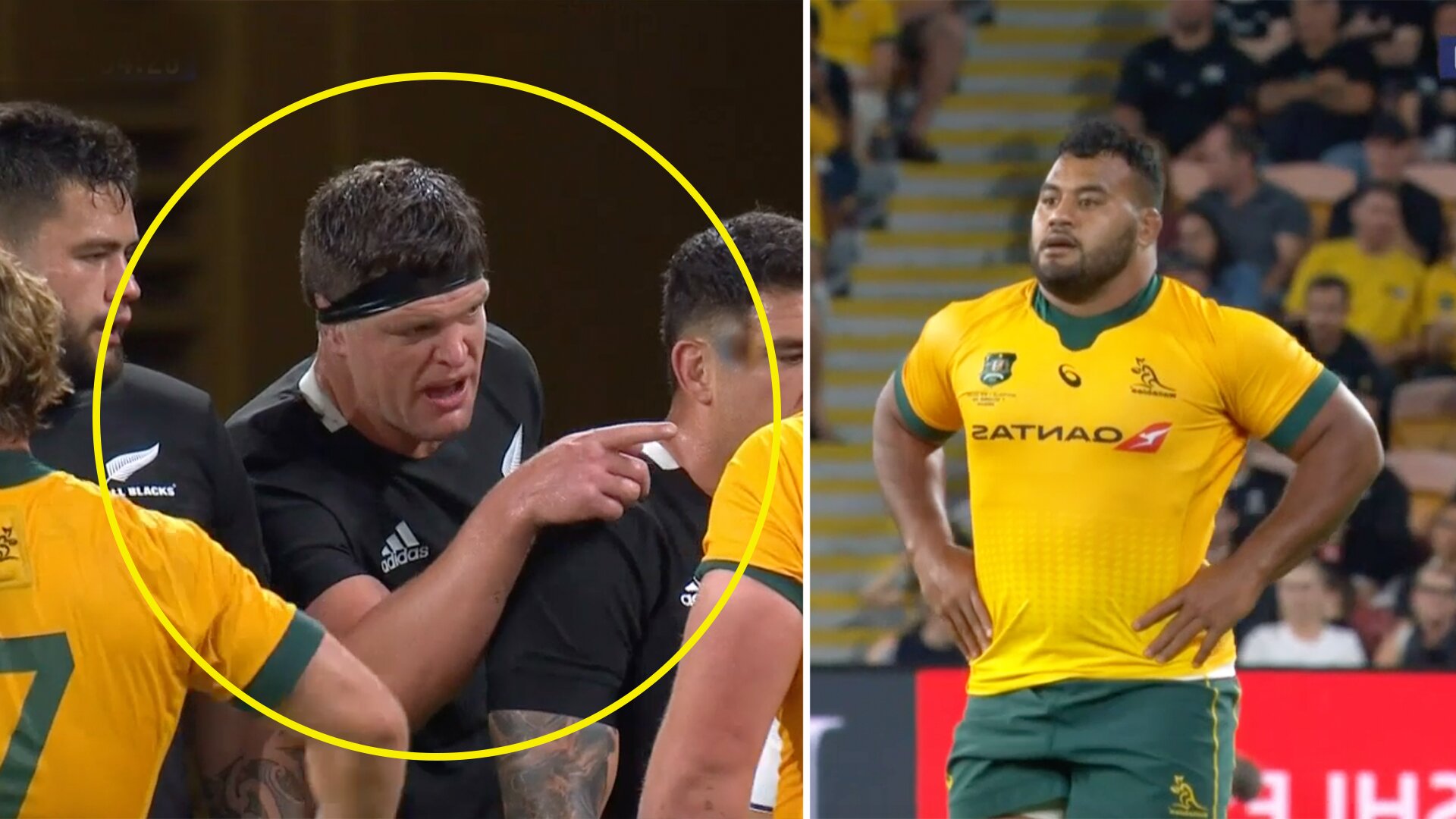 Ardie Savea was in the news this week after it was revealed that he did not wear a mouth guard for the match against Australia. A move that riled sponsors and fans alike.

Much has been made this week of whether professional rugby players should wear gumshields or not. With spectators noticing that Ardie Savea wasn’t wearing one it led for calls for the piece of protective equipment to become mandatory at the highest level of the game.

One viewer has noticed this moment in which Scott Barrett notices that Taniela Tupu is chewing on some gum and therefore mustn’t be wearing his mouth piece.

The Crusaders lock then goes on to call out Tupou to the referee, pointing at his opposite man.

This whole gum shield fiasco is really gaining traction. Irony is that Ardie Savea is stood right behind Scott Barrett with no mouth guard in sight pic.twitter.com/1CwbroooT9

It seems that players from either side saw the funny side of this dispute but it does raise the question that if players know that it’s against the rules then why is it continuing to happen?

What do you think? Should players be made to wear a gumshield or not?

South African tighthead in at Scarlets, Harlequins pick up a Championship loosehead prop

Scholtz had been playing for the now liquidated Southern Kings in the Guinness PRO14, while the 26-year-old also had spells with Currie Cup sides the Pumas and Lions during his professional career in South Africa.

With Samson Lee on international duty and Alex Jeffries recovering from surgery on an elbow issue, Scarlets wanted to strengthen their options at No3. Scholtz is due to arrive at Parc y Scarlets next week and will be available for action later this month once he has undergone the necessary Covid-19 protocols.

Scarlets head coach Glenn Delaney said: “At the moment Javan Sebastian and Werner Kruger are doing a fine job for us, while young Harri O’Connor has shown a huge amount of promise, but it’s an area we felt we needed to strengthen.

“We have been watching Pieter for a while. He is a strong scrummager and has a lot of experience playing in South African rugby. We look forward to welcoming him to the Scarlets.”

Meanwhile, Paul Gustard’s Harlequins have welcomed loosehead prop Wrafter into the fold at the London club ahead of next weekend’s start to the 2020/21 Gallagher Premiership season.  The 24-year-old Bedford front row was previously in National League One with Birmingham Moseley, having also spent time in Worcester’s academy.

Wrafter said: “I’m really excited to join Quins. This is one of the most famous rugby teams in the world so to be offered the chance to pull on the jersey is brilliant. The opportunity to learn from the likes of Adam Jones and Jerry Flannery as coaches as well as some of the experienced players here is one I couldn’t pass up. I’m excited to add to the environment and compete for a spot in a Premiership matchday squad.”

Gustard added: “We’re grateful to Bedford for allowing their talented young loosehead prop Joe Wrafter to join us on a short-term contract. Joe’s arrival gives us another option in a position in which we are lacking in terms of depth, which is further compounded while Joe Marler is away with England.

“Joe Wrafter is an explosive carrier and aggressive young man who is well known to us through our contacts in the Championship and National League One. He comes with a good reputation on the field and excellent recommendations off it.”