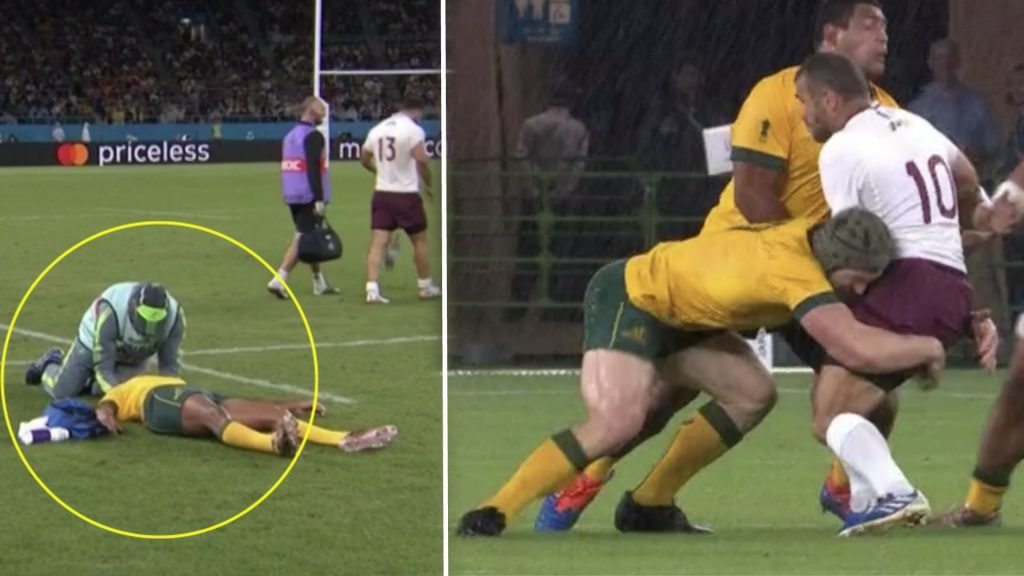 Australia and Georgia take each other on in their final World Cup pool match, and the collisions have been simply brutal.

Kurtley Beale took a nasty hit to the head early on in the game as one of the Georgian players slipped and landed on his head. Almost certain that Beale was concussed from that.

After a nasty looking knock to the head, Beale is back up and off the field for a HIA #AUSvGEO #RWC2019 pic.twitter.com/obyQ0kQzfT

You could tell he was in a bad way after this.

The Georgian defence was brutal in the first half of this match they attempted over a hundred tackles in just the first 10 minutes.

But it wasn’t just the Georgians that were putting in some serious defence.

Just look at this tackle from David Pocock in the first half. Serious hit from the player who is probably the best known in the World for the tackles that he puts in these games.

The Scots must defeat the tournament hosts for a chance to progress to the quarter-finals, with four or more championship points than their opponents required to guarantee safe passage to the last eight.

An emphasis on rotation and recovery has seen Townsend make 12 changes to the team which started Scotland’s 61-0 victory over Russia two days ago, though shows just two changes to that which took to the field against Samoa in round two almost a fortnight ago (34-0) – meaning all 31 squad players featured in these vital Pool wins.

Laidlaw is among seven of those rested after the Samoa win to begin preparations for this Sunday’s Test against the Brave Blossoms, providing a fresh spine of the team in spite of the four-day turnaround between rounds three and four.

Townsend said: “It’s taken a real squad effort from our players here in Japan to put us in a position to play for a place in the quarter-finals, having risen to the challenge of what’s effectively been knockout rugby since the second round of our Pool.

“The entire group has featured in our past two Tests, both of which have been clinical and professional performances.