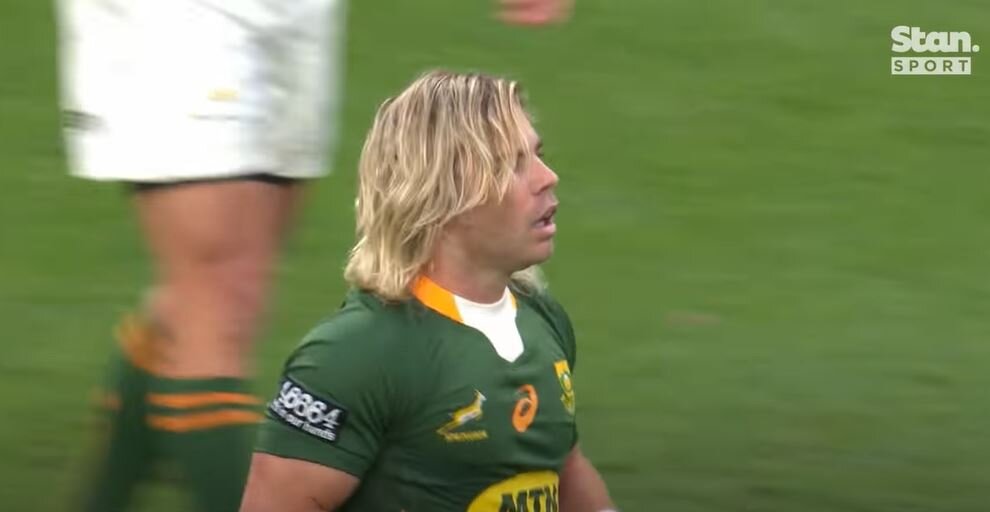 The moment we knew the Springboks were about to crumble

It was an act of desperation. Faf de Klerk was smashed metaphorically for playing Wallabies scrumhalf Nic White.

Referee Matthew Carley wasn’t having it. But was Faf actually in the wrong here?

There’s a convention in rugby not to play to scrumhalf when he’s getting the ball out of the ruck, but actually, it’s a gray area in the law. Typically, most players can’t play the scrumhalf as they are off their feet OR if they’re not, they’re often not behind the hind most foot of the ruck.

This covers most of those who interfere with a nine or player acting as scrumhalf.

However, if you watch this, Faf may have a point. He’s actually on his feet and behind the hind most foot of the ruck. Our understanding is that when the ball is picked up and out of the ruck, it becomes playable.

So if Faf has left the ruck and is onside, can he not play the ball? He gets away with this in other matches but is hauled up here by Carley. He shouts: “You’ve got to let him go!”

Can anyone help us out here and explain if we are misunderstanding this? Was Faf still part of the ruck, but surely the ball have left the ruck, so it had ended?

IN OTHER NEWS: Vodacom Bulls U20 make several changes for clash against Leopards

The Vodacom Bulls Under-20 side has made several changes to the team that will be in action for their SA Rugby Under-20 Championship clash against the Leopards Under-20 on Saturday.

The side from Pretoria returns to action after a two-week break, on the back of a narrow 11-17 defeat to their DHL Western Province counterparts in challenging weather conditions in Cape Town.

The Vodacom Bulls U20’s, who currently occupy the second spot on the log table, will be looking to bounce back to winning ways against a competitive Leopards U20 team that sits third on the log.

Vodacom Bulls U20 head coach, Wessel du Plessis, said: “It’s great to be back in action again. We have used the past two weeks to work hard on areas we felt needed improvement while also enhancing the ones we have done well so far.

“The Leopards U20 will be a tough opponent. They have shown what they are capable of in their previous matches. We will have to be on top of our game if we are to bounce back to winning ways.”