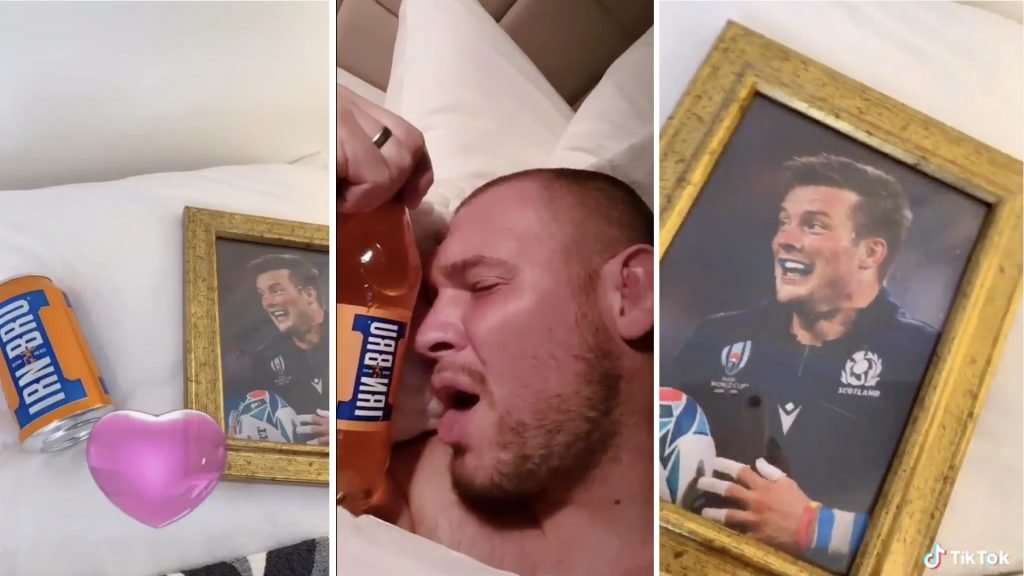 The banter between the Scotland national team and IRN-BRU is truly brilliant. For anybody not too familiar with IRN-BRU. They are a Scotland carbonated drink brand that is MASSIVELY popular in Scotland.

The Scottish prop has made a name from himself over the World Cup with some of his funny antics on tour. These antics have included, making a Japanese man say some hilarious Scottish slang, and savaging their team captain for having the best hotel room of the whole team.

Reid released this video online yesterday, sharing a bed with the drink in his hotel room in Japan. I don’t think he was expecting an actual response from IRN-BRU themselves.

Here’s the original video he uploaded…

Cant sleep.soooooooo let's make a video🥳🥳 @irnbru get your chequebook out pic.twitter.com/X83jRdCMJM

And then here is the response that IRN-BRU posted this morning, some fantastic banter here!

This is the kind of banter that we love to see online! As long as it helps to get away from the constant chat about cancellations which can get a bit depressing.

The Scots must defeat the tournament hosts for a chance to progress to the quarter-finals, with four or more championship points than their opponents required to guarantee safe passage to the last eight.

An emphasis on rotation and recovery has seen Townsend make 12 changes to the team which started Scotland’s 61-0 victory over Russia two days ago, though shows just two changes to that which took to the field against Samoa in round two almost a fortnight ago (34-0) – meaning all 31 squad players featured in these vital Pool wins.

Scrum-half Greig Laidlaw returns to captain the side and build on his national team record of appearances in the role, with Stuart McInally listed among an impactful bench.

Laidlaw is among seven of those rested after the Samoa win to begin preparations for this Sunday’s Test against the Brave Blossoms, providing a fresh spine of the team in spite of the four-day turnaround between rounds three and four.

Townsend said: “It’s taken a real squad effort from our players here in Japan to put us in a position to play for a place in the quarter-finals, having risen to the challenge of what’s effectively been knockout rugby since the second round of our Pool.

“The entire group has featured in our past two Tests, both of which have been clinical and professional performances.

“It was great to see players get the opportunity to play in this World Cup on Wednesday and it looked like they enjoyed the experience. irn-bru

“The effort invested in defence, support play and clearing has been encouraging and has put a lot of pressure on the opposition.

“A few players have pushed hard for selection with the form they’ve shown in training and in the last two games and it’s now down to this group of 23 men to build on this momentum and squad togetherness to deliver a winning performance against Japan in Yokohama in two days’ time.” irn-bru

Every effort has been made to manage the load on the remainder of Sunday’s starting team, with Fraser Brown – rewarded with his first start of the campaign at his favoured position of hooker – prop Willem Nel, lock Grant Gilchrist and centre Chris Harris all playing half an hour or less against Russia.

Edinburgh’s Magnus Bradbury returns to partner the rested Thomson and Jamie Ritchie – an unused replacement against Russia – in the back-row.

Wings Darcy Graham and Tommy Seymour are the only others to have started against Russia, completing the back-three with full-back Hogg. irn-bru army

Townsend added added: “The opportunity to face the hosts in such a decisive Pool match will be a unique occasion and should be a great spectacle.

“Games of this magnitude don’t come around very often in a playing career so we will be giving it everything to make sure it is a memorable match.” irb-bru