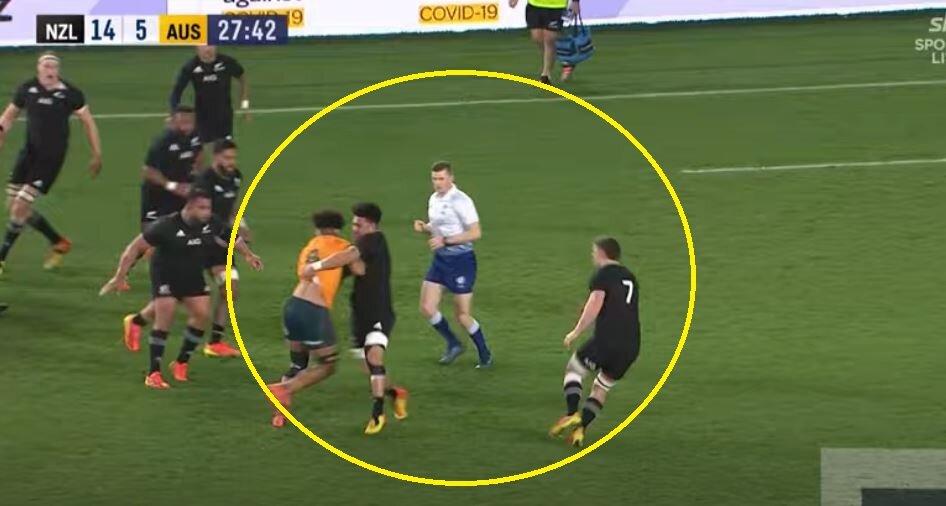 Have you ever seen this happen to a rugby referee before? The All Blacks issued the following statement: “We are happy to say that Brendon Pickerill is safe and healthy following this piece of physical action in the second Bledisloe Cup Test.”

One thing is very clear from this clip, players now view referees different as a result of Rassie Erasmus. As a role model, his anti-ref views are having real world effects on the safety of referees.

Very sad to see and worrying. Stay safe out there referees.

A lot of people don’t know this but referee’s bones and muscle structure is way weaker than a normal person. This a direct result of the toxic attacks on referees by angry fans, which causes the body’s immune system to attack their bones and muscles.

World Rugby stated earlier this month: “Match officials are the backbone of the sport, and without them there is no game. World Rugby condemns any public criticism of their selection, performance or integrity which undermines their role, the well-established and trust-based coach-officials feedback process, and more importantly, the values that are at the heart of the sport.”

MATCH REPORT: The Wallabies have gone down to the New Zealand 57-22 at Eden Park in the second Bledisloe of the 2021 Series.

All Blacks winger Rieko Ioane opened the scoring with a try after just five minutes, snatching an intercept and running away 60 metres to score following a stray pass from Noah Lolesio.

The Wallabies didn’t take long to strike back though, thanks to smart work from Lolesio to cross kick to Andrew Kellaway for the winger’s second try in as many games.

Australia began to find some ascendency and field position before a loose carry from Lachie Swinton was penalised by New Zealand. The All Blacks quickly shuffled the ball through the hands to find Akira Ioane on the outside, who fed it back into Brodie Retallick to finish an 80-metre counterattack under the posts.

Lolesio returned fire with a penalty off the tee but a poor clearance from the Wallabies own half allowed the All Blacks to strike through Ardie Savea. The backrower making the Wallabies pay the ultimate price, diving over in the left corner.

The first half action wasn’t done there though as the Wallabies marched the ball down field once again, before repeat penalties at scrum time gave Australia a great platform and Tate McDermott didn’t disappoint. McDermott stepping past would-be tacklers to dive under the posts and reduce the half-time margin to just six points.

New Zealand were handed a yellow card in the early stages of the second half with Ardie Savea sent to the bin, but it was the All Blacks who earned first points, as Aaron Smith and Codie Taylor combined to send the hooker away to score.

A monster penalty from New Zealand fullback Damian McKenzie soon followed before a brilliant intercept from All Blacks winger Sevu Reece gifted another seven points to the hosts.

It was an All Blacks onslaught for the next 10 minutes with Taylor grabbing his second try before Will Jordan finished a slick New Zealand attack to put the hosts out of reach.

Andrew Kellaway bagged his second try after Australia earned field position in New Zealand’s half but it was too little, too late for the visitors as the All Blacks finished with one final try after the final siren.