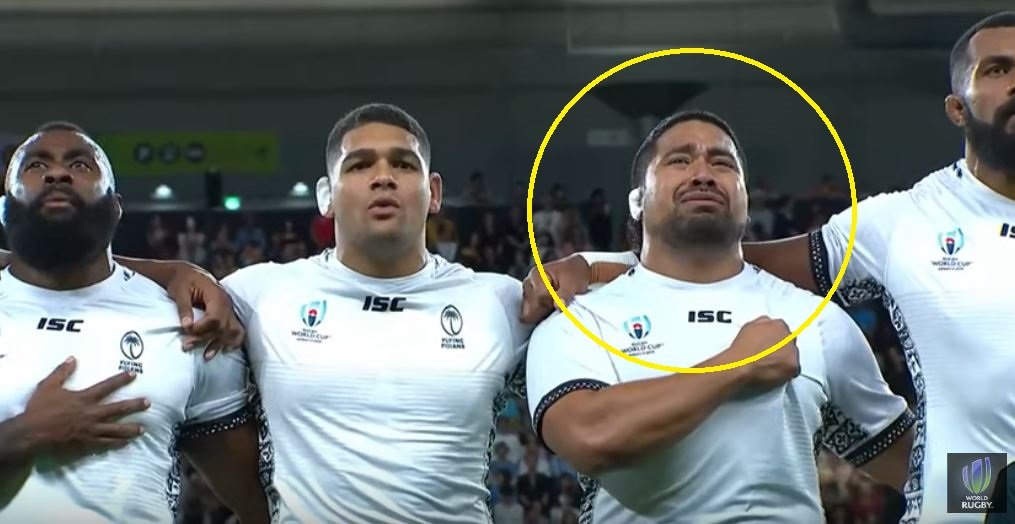 Emotions got the better of this Fiji Rugby prop. Sad times.

Australia were behind at the break (14-12) for only the second time in a Rugby World Cup pool match and the first time since 1995 (13-14 v South Africa in a match which the Wallabies went on to lose 18-27).
Fiji looked like they might become the first Tier 2 nation to beat Australia at a Rugby World Cup when they led 14-12 at half-time.
At the World Cup, Fiji have now played Tier 1 opposition 12 times, losing 11 and winning only one, a 38-34 win against Wales in Nantes at RWC 2007.

Tolu Latu scored two tries for the Wallabies. The only other starting hookers in the No.2 jersey to score multiple tries in a World Cup match have been Keith Wood (4) for Ireland against USA at RWC 1999, and Phil Greening (2) for England against Tonga, also at RWC 1999.
Fijian-born Wallabies Samu Kerevi and Marika Koroibete both scored tries in the space of two minutes. Before this match, no Fijian-born player had scored a try against Fiji at the Rugby World Cup.

For the second World Cup in a row, a Fijian became the first player to be sin-binned when Levani Botia was shown a yellow card after 61 minutes. In 2015, Nikola Matawalu received a yellow card in the opening match against England.

Pecali Yato’s first-half try after 8 minutes was the fastest try by any Tier 2 nation against the Wallabies in a World Cup match. The previous fastest was by Japan at RWC 1987 after 12 minutes. Yato subsequently had to leave the field with concussion after 26 minutes. Despite this he still made more metres (81) in this match than any player except Australia’s Marika Koroibete (128).

Michael Hooper’s first-half try means that Wallaby captains have now scored tries in all Rugby World Cups except 1999. The only try scored by a Wallaby captain in a losing cause remains the one scored by Michael Lynagh in South Africa’s 27-18 win over Australia at RWC 1995.

Ben Volavola’s 11 points (three penalties and a conversion) in this match is already more than half of his total points tally (16) from RWC 2015.