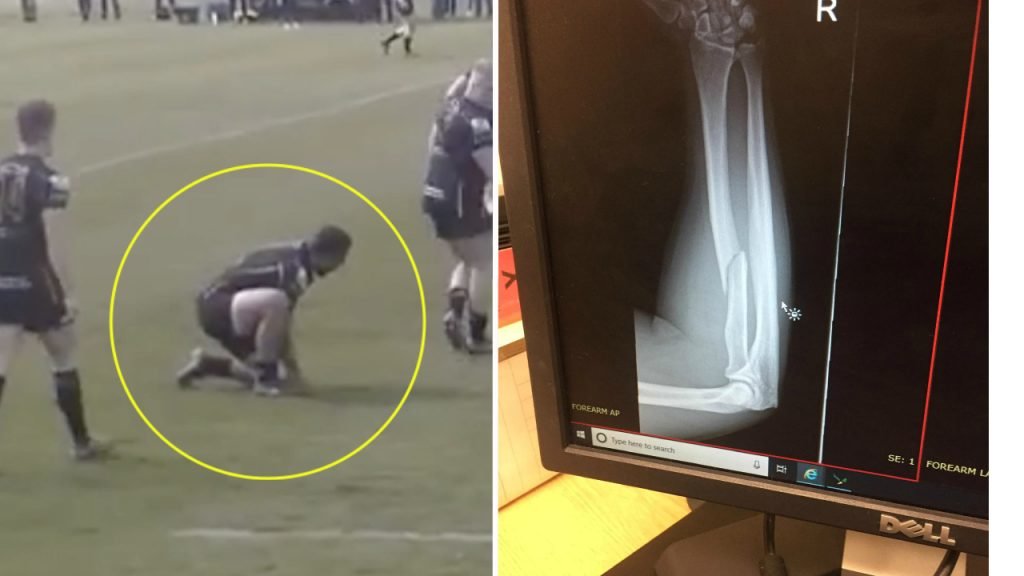 This truly is a remarkable clip and it highlights why players from the Pacific Islands are considered by many to be the best in the world. In a match between English clubs Bridgnorth and Scunthorpe, the Bridgnorth flanker can be seen going into contact where he breaks his radius bone.

It’s a nasty break as you can see here. He broke his radius bone clean through and there was no way that he could play on. But rather than leave the field, Loti decided to bravely rejoin the field of play as Scunthorpe attacked again up the left channel.

He even went on to jump into a breakdown straight after, risking further damage to his already broken arm.

We have seen some tough rugby players in our time but this truly is on another level. The pacific level.

After the game Loti had to have surgery on his broken arm, and you can see his tattoo has been moved due to the stitching after the surgery! Pacific Islanders and Tongan players are hard as nails!

In other news: Canada Men qualify for Tokyo 2020

Number one seeds Canada justified their favourites tag in the Rugby Americas North (RAN) Sevens men’s competition as they completed an unbeaten two days in George Town in the Cayman Islands on 6-7 July with a 40-5 win over Jamaica in the final.

Determined to join their female counterparts at Tokyo 2020, Canada put on a clinical display to see off a Jamaican side that still has another chance to qualify via next year’s Olympic Repechage tournament. That route is also still open to Mexico who finished in third place.

In the women’s competition, as USA and Canada secured their place for Tokyo 2020 last month after finishing second and third respectively in the HSBC World Rugby Women’s Sevens Series 2019, winning the RAN Sevens did not come with automatic qualification for three-time defending champions Mexico.

Instead, Las Serpientes and beaten finalists Jamaica will represent the Rugby Americas North region at the repechage next year.

Seven men’s and six women’s teams have now confirmed their places at Tokyo 2020, where the men’s competition will run from 27-29 July, followed by the women’s from 30 July to 1 August.

Hosts Japan have qualified their men’s and women’s teams with Argentina’s and Canada’s men and Brazil’s women booking their tickets as regional qualifier winners over the last month.