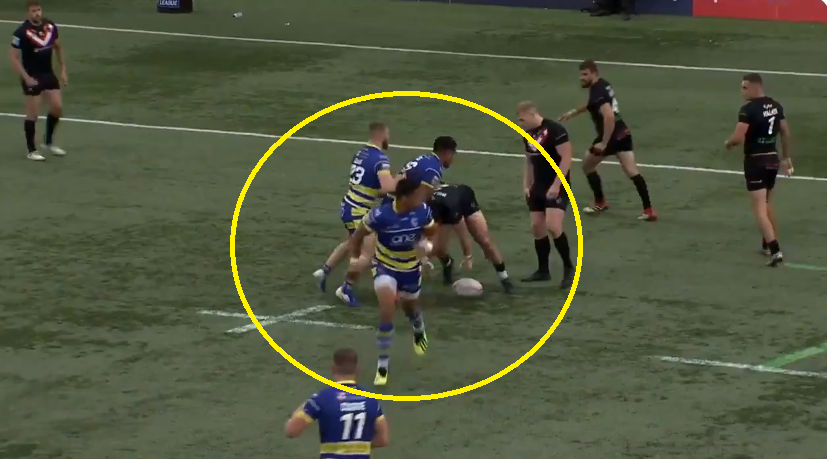 This was Luther Burrell’s first involvement in his league debut

The move was announced in February, but he remained with his former club Northampton Saints until the end of their season before the move up north.

It has taken him a few weeks to acclimatise to the new code, but he made his much anticipated debut in blue and yellow against league strugglers London Broncos.

The 31-year-old came on with 20 minutes remaining in his side’s 36-6 win, and made his presence felt straight away.

Chasing a deep kick, the new centre clattered into fullback Alex Walker and announced himself to the rugby league world.

Burrell joins Warrinton at the perfect time, with the side sitting in second place in the Super League table, and in the semi-final of the Challenge Cup.

Having played for Huddersfield Giants as a teenager, Burrell is not completely new to the game of league, but there will still be a period whereby he settles into his new team. However, he will surely be in full swing come the closing stages of the season.

Alun Wyn Jones has announced a contract extension with the Welsh Rugby Union and the Ospreys, securing his future in Wales.

The world’s most capped international second row (134 international appearances – 125 for Wales plus nine British & Irish Lions caps) made the announcement direct to supporters this morning that he has extended his deal through to June 2021.

Since making his debut for his hometown Region, Alun Wyn has become the Ospreys’ leading appearance holder, featuring 238 times for the region to date.

The Wales captain, who is preparing to head to Switzerland with the national squad this week for their first overseas RWC training camp, first signed a NDC back in March 2015. The announcement today allows Jones to fully focus on the team’s preparations this summer and will also be a timely boost to incoming head coach Wayne Pivac.