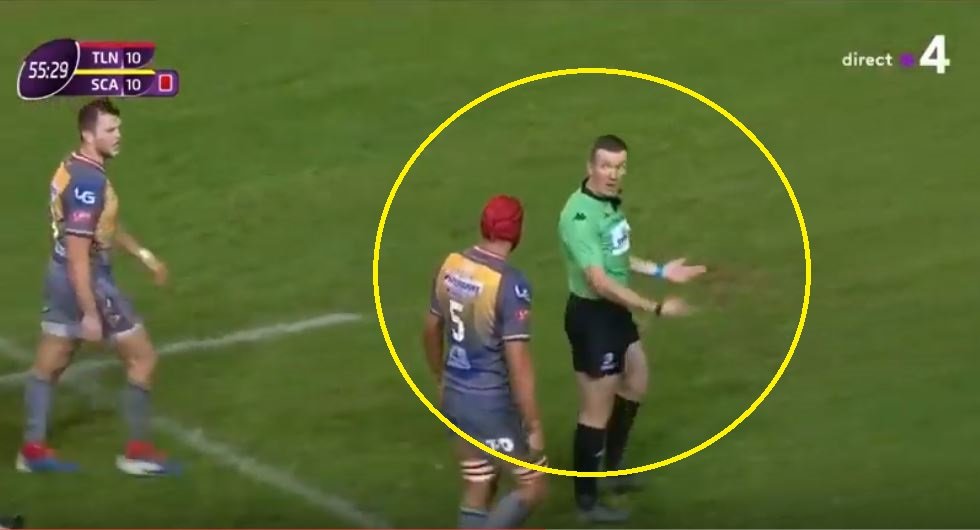 Tom Foley is in fact originally from South Wales and played rugby from a young age, but following a string of injuries took up refereeing while completing his degree at Bristol University.

It’s a tough old gig refereeing out in France with the crowd whistling away and lots going on. Plenty for Tom Foley to deal with, but he’s doing a decent job. Toulon leading the Scarlets 10-7 with half-time approaching.

That doesn’t stop him from turning up the alpha heat on Welsh sides like Scarlets. You can hear him say: “I’ll keep going”

Listen to the audio below:

Foley joined the Bristol Referee Society in 2007 and progressed through the ranks, being promoted onto the South West Group in 2009 and National Panel in 2011. He was appointed to join the RFU as a full-time referee in 2014.

Whilst the 20 competing clubs and their stars of the world game will be focused on boosting qualification prospects for the knockout stage of the Heineken Champions Cup, there will also be an opportunity to celebrate the tournament’s rich and prestigious history during Round 2 this weekend.

Ulster Rugby kick off the action with their 150th match in European club rugby’s blue-riband competition when they welcome ASM Clermont Auvergne to the Kingspan Stadium tomorrow evening live on BT Sport for what promises to be a mouthwatering clash between the clubs who both registered victories in Round 1.

The 1999 tournament winners will be presented with a commemorative silver salver in recognition of their place among the 11 clubs on the Heineken Champions Cup roll of honour.

The holders, Saracens, will celebrate a century of appearances in the competition when they take on the Ospreys at Allianz Park in front of the Channel 4, Virgin Media and BT Sport cameras.

Both clubs are in need of a win on Saturday after opening round setbacks, and when the Welsh region were last in north London they ran the three-time winners close before holding Mark McCall’s side to a 15-15 draw in the return match at the Liberty Stadium.

Anticipation is building for a stellar Finals Weekend in Marseille next May with over 30,000 tickets already sold for the Heineken Champions Cup showpiece, and a combined total of almost 50,000 for the two finals at the Stade Vélodrome.

Other Heineken Champions Cup, Round 2 highlights include:
• Simon Zebo and Donnacha Ryan are set to return to Thomond Park in the colours of Racing 92 on Saturday as the French side go up against Munster Rugby for the third time in four seasons.

• That is part of a Super Saturday treble of Franco-Irish battles with Joe Tekori set to make his 50th appearance in the tournament as four-time winners Toulouse host Connacht Rugby on Saturday. That will be followed by a first Heineken Champions Cup clash between TOP 14 pace-setters, Lyon, and Leinster Rugby at the Matmut Stadium de Gerland.

• Following Clermont’s win against Harlequins in Round 1, we have another repeat of last season’s Challenge Cup semi-final in the top flight on Sunday as Sale Sharks welcome La Rochelle to the AJ Bell Stadium live on BT Sport.