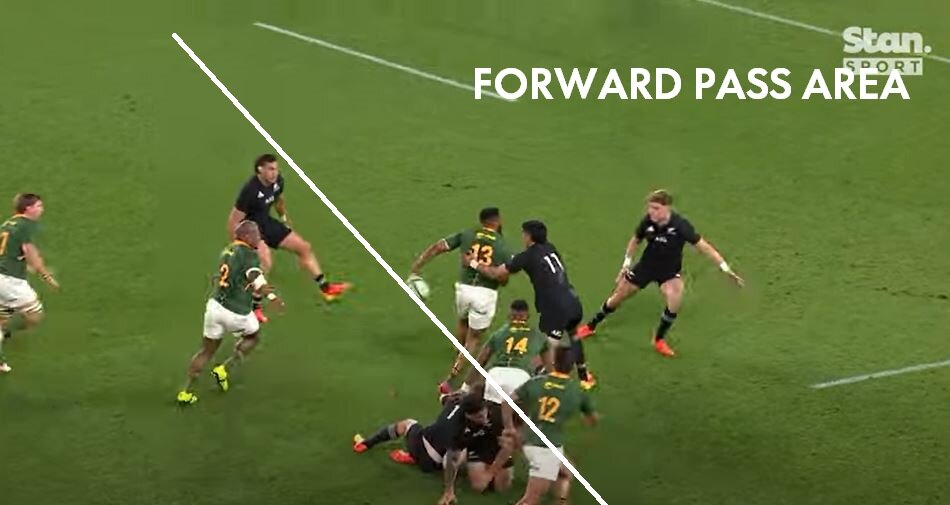 Yeah, so we’ve analysed the footage of this pass from the Springboks and from what we can see, it’s probably forward.

Don’t get us wrong, it was a lovely pass from Am, who’s been playing great rugby of late, but the rules are rules, or as pedants would say, the Laws are the Laws.

This led to the first Springboks try and laid the foundation for the Springboks to go and play a great game.

MEANWHILE: A hat-trick to Andrew Kellaway has seen the Wallabies defeat Argentina 32-17 in their last home match of the 2021 season and secure second position on the eToro Rugby Championship ladder.

The previously sold-out fixture saw a reduced capacity crowd of 20,441 fans filed into Cbus Super Stadium as the Wallabies won their fourth straight Rugby Championship fixture for the first time in the competition’s history.

Returning to where he made a historic return to the gold jersey in round three of the Rugby Championship, Quade Cooper again opened the scoring for the Wallabies.

Folau Fainga’a was next to add to the scorecard coming off the back of the Wallabies maul as they capitalised on the one-man overlap following a yellow card to Tomas Lavanini.

Kellaway swiftly made the most of the weakened Argentinian defence, finding a gap off the hip of Rob Valetini, allowing Cooper to add the extras, before Emiliano Boffelli closed the gap for the visitors, as he kicked a penalty on the stroke of halftime to make the score 15-3.

The Wallabies were first to strike in the second half as Samu Kerevi slid over the chalk before Kellaway again found a gap in the defence before repeating his efforts moments later to score his first Test hat-trick.

Argentina quickly responded to the Wallabies increase in tempo with Thomas Gallo diving through the ruck to score back-to-back tries for the visitors to close out the match.