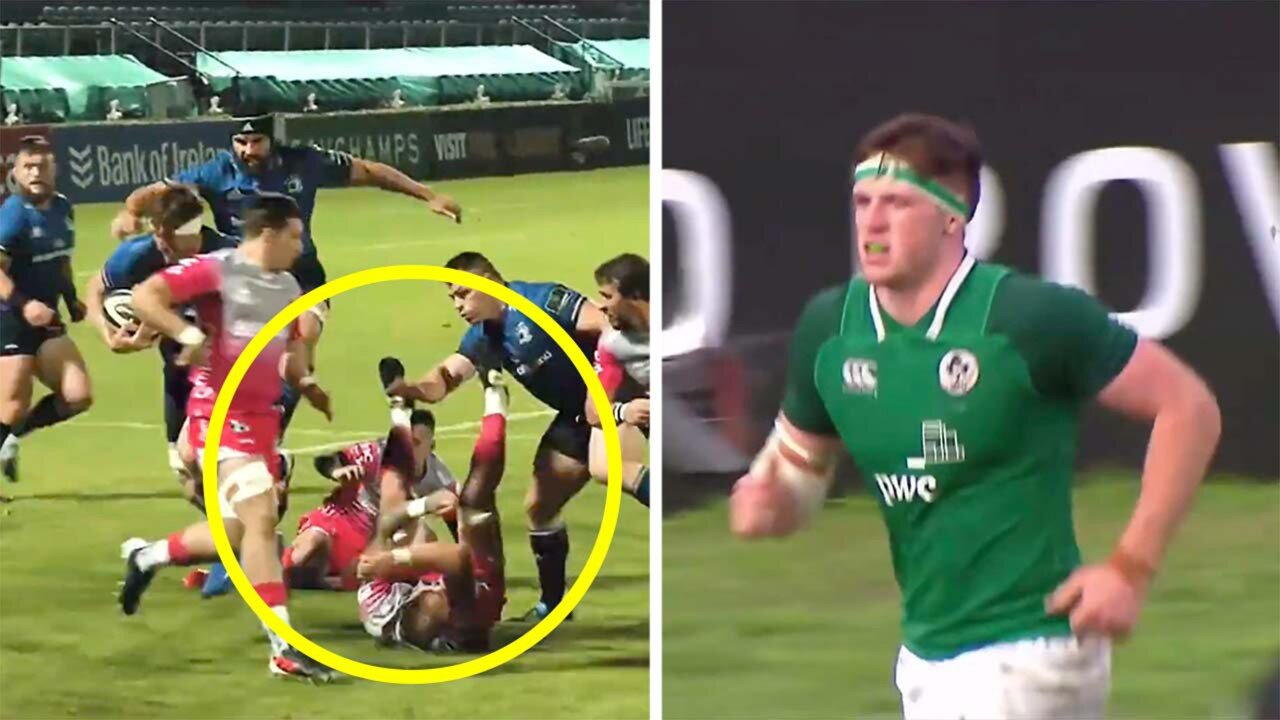 It’s not often that you see a 21-year-old player physically dominating established international players but that is exactly what we’ve seen with this new Irish star, Ryan Baird.

A new video has dropped from the rugby channel ‘billybobjoli’ and it shows just how devastating this young Irish forward is.

The 4-minute video shows the 21-year-old playing for Ireland u20’s and Leinster in a devastating highlights reel which brilliantly showcases the second-rower’s phenomenal running game.

One standout moment from the video comes as Ryan Baird is making one of his trademark rampaging runs against the Dragons. We watch as he swats away defender after defender before bouncing off Welsh international Ross Moriarty like he wasn’t even there.

Baird was recently ruled out of the rest of this year’s Six Nations after straining his adductor muscle for Leinster in last weekend’s victory over Benetton. The young prodigy had been tipped to feature in Ireland’s remaining fixtures in the competition as a replacement for the suspended Iaian Henderson.

Watch the phenomenal new montage below

Title-chasing Ireland will have to do without Iain Henderson in the upcoming Six Nations games against Italy and France after he was banned for three weeks following last Saturday’s red card in Wales.

Who impressed you most this afternoon at the Liberty Stadium? 🌟

Henderson was on PRO14 duty with Ulster when he got into trouble in the 75th minute, getting red-carded for charging into a ruck and making contact with the head of Dan Evans when time was running out in the match the Irish side won 24-12.

His suspension, which runs until November 9, will give Andy Farrell a second row headache. The Ireland coach has already had to rejig the locks in his squad, Ultan Dillane getting called in on Wednesday to replace Ryan Baird, who was injured while playing for Leinster in Italy last Saturday.

With Henderson absent for family reasons, Farrell went with a pairing of James Ryan and Devin Toner when Ireland last played a match, the February defeat to England.

Toner isn’t in the squad currently training ahead of the October 24 restart at home to Italy which will be followed by the October 31 trip to Paris to face the French. Tadhg Beirne and Quinn Roux are Farrell’s other second row options.

The PRO14 statement confirming Henderson’s ban read: “Iain Henderson of Ulster has been banned for a period of three weeks as a result of his red card in the Guinness PRO14 round two fixture with Ospreys on October 10.

“Henderson was shown a red card by referee Mike Adamson (SRU) under Law 9.20 – dangerous play in a ruck or maul.

“The disciplinary hearing was handled by Andrea Caraci (FIR) and it was accepted that the player’s actions warranted a red card for foul play. The incident was deemed a mid-range offence, which carries a six-week suspension.

“The player’s clean disciplinary record, co-operation throughout the process and remorse shown warranted mitigation of fifty per cent, bringing his ban to three weeks. The player is free to resume playing from midnight on November 9.”