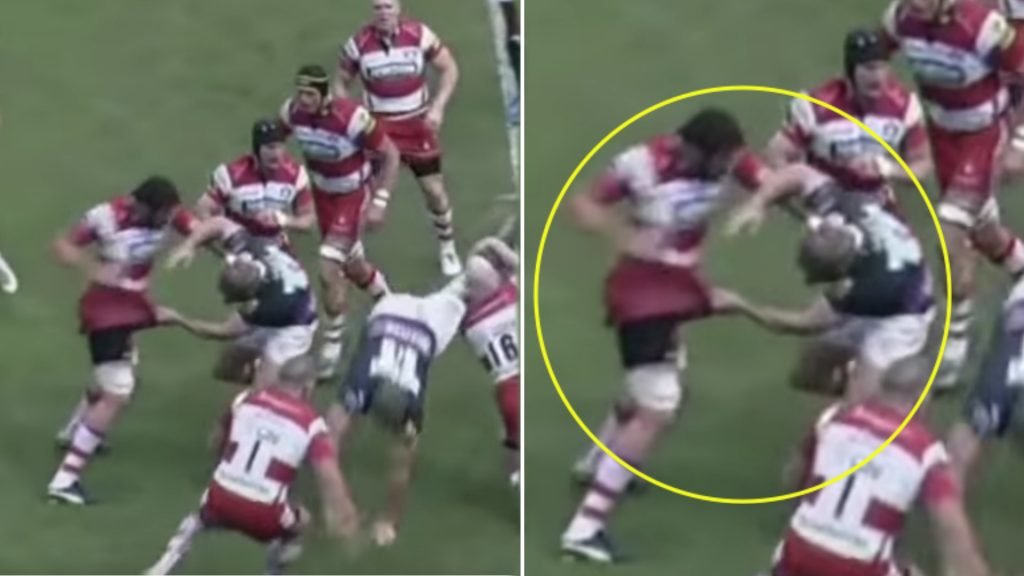 WATCH: Jim Hamilton, latest to have past ENFORCER lifestyle exposed for the World to see

Many know Jim Hamilton, as the very likeable and laid back host of The Rugby Pod podcast. But in the past, he was known by many in a very different way.

Hamilton was one of Scotland’s top locks in the early noughties, having played for Saracens, Leicester and Gloucester. For these teams he earned himself a reputation as a player not to be trifled with.

This video here shows him at his very grizzliest, but we’re not sure if ‘thug’ is the correct description for him here.

In other news: Slade admits past defeats have hurt Exeter mentally

Slade admits it was a ‘dark place’ for him and his team-mates. Having experienced the high of victory the previous year, now the Chiefs were having to soak up the disappointment of another Twickenham defeat.

“I remember a few of us boys sat down after the game last year and told ourselves we never wanted to feel like that again,” said Slade. “That experience a couple of year ago of winning the league was probably the best rugby experience I’ve ever had.

“To do that and get success with some of your best mates is such a good feeling and the days that follow on after that celebrating are just so good.

“This year we’ve been doing everything we can to make sure we don’t feel like we did last year. Now, we’ve got one more game at the weekend to do that.

“Whatever it is that spurs you on, we’ve got to use that to the best we can this weekend because we know what the feeling is having the reverse result like we had last year.”

Certainly, the Chiefs have gone about their business impressively so far this season, booking their semi-final place in record-breaking time, before then seeing off Northampton Saints comprehensively last weekend to secure their passage back to the final.

“I think over the last couple of years we’ve had a bit of a shift in our mindset,” added Slade. “If we’re honest, we were sort of just pleased to be in that first final. We then had a taste of winning it the year after and then having the complete disappointment of being absolutely gutted at losing last year.

“I think it shows the way the shift in mindset amongst the boys and coaches, and probably the fans as well, is what we expect of ourselves. We expect a lot more all the time now and if we can go one better this year then that would obviously be a massive thing for us.

As one of the more recognisable names within Chiefs squad, Slade is quick to pay tribute to those around him and the role that have played in ensuring the club once again finished the regular season as top dogs.

“It’s been way more than just the boys taking the field at the weekend,” he explained. “We’ve virtually used our whole squad this year and I think that shows how strong our whole squad is.

“I mean boys get injured, boys are away on international duty, or others just need a rest at times, whichever guys gets called in, they step up and it’s seamless, there is no drop off.

“That’s credit to the coaches for the work they do and the recruitment they don, but also an awesome effort from all of the boys this year to get us where we are.

“Even if boys haven’t been playing that much, the work they’ve being doing in training, prepping the side, playing at the weekend for games has been top class and I know the boys at the weekend can’t thank them enough.”