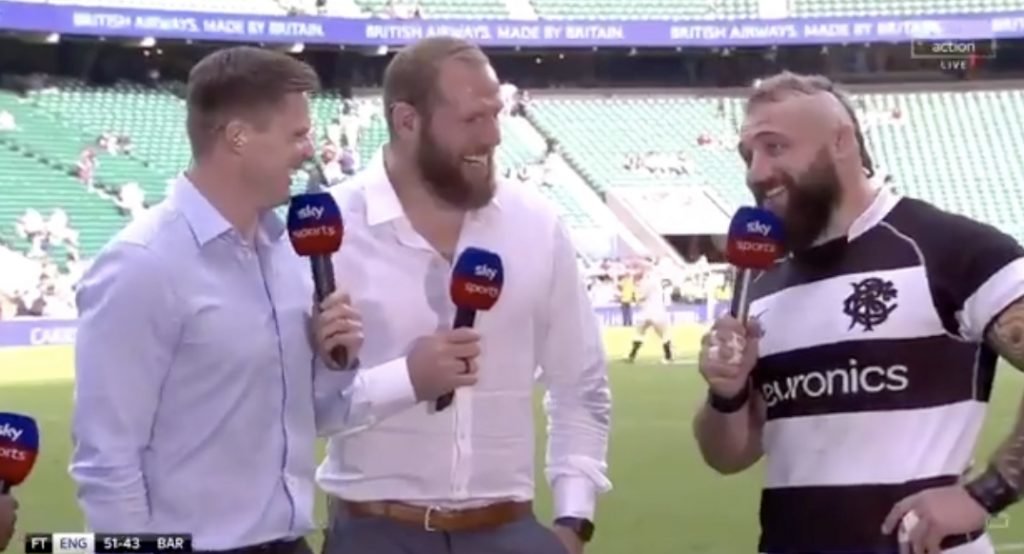 WATCH: Joe Marler gives one of the best post-match interviews we’ve ever seen

This is why Joe Marler is one of the funniest men in rugby.

After the match between the Barbarians and England, Marler gave an interview to Haskell and Ashton, probably the funniest trio in English Rugby.

The result was absolutely fantastic. And the interview itself will be remember for a long time.

In other news: Wales name Under 20 team for World Cup openerWales head coach Gareth Williams has named his side to play Argentina in the opening round of the U20 World Rugby Championship at the Racecourse in Rosario on Tuesday (KO 5pm BST).

The starting XV is a settled combination with Scarlets second row Morgan Jones the only player who didn’t feature in this season’s U20 Six Nations championship, and that was due to injury.

Wales find themselves in a demanding pool with defending champions France and Fiji arriving in Argentina with big expectations and Williams is fully aware playing the Pumitas on their home patch will be no easy task.  In last year’s championship, Argentina defeated Wales comfortably in the 5–8th place play-offs to eventually end the tournament in sixth place, one spot ahead of Wales.

There are four survivors from that defeat in the starting line-up with captain Dewi Lake, winger Ryan Conbeer, centre Tiaan Thomas-Wheeler and fly-half Cai Evans all aiming for a better result this time round, while replacements Rhys Davies and midfielder Max Llewellyn were also on the wrong end of the result in Narbonne.

“We have come to Argentina wanting to be as successful as possible, but are very aware that wins at international level do not just happen. Especially against a quality team like Argentina in their opening match of a home World Cup,” said Williams.

“The challenge for us is to be at our best from a tactical, technical, physical, and mental point of view to achieve those results.  ”If we can harness those areas in our preparation, we’ll hopefully fall the right side of the scoreboard come the end of 80 minutes.”