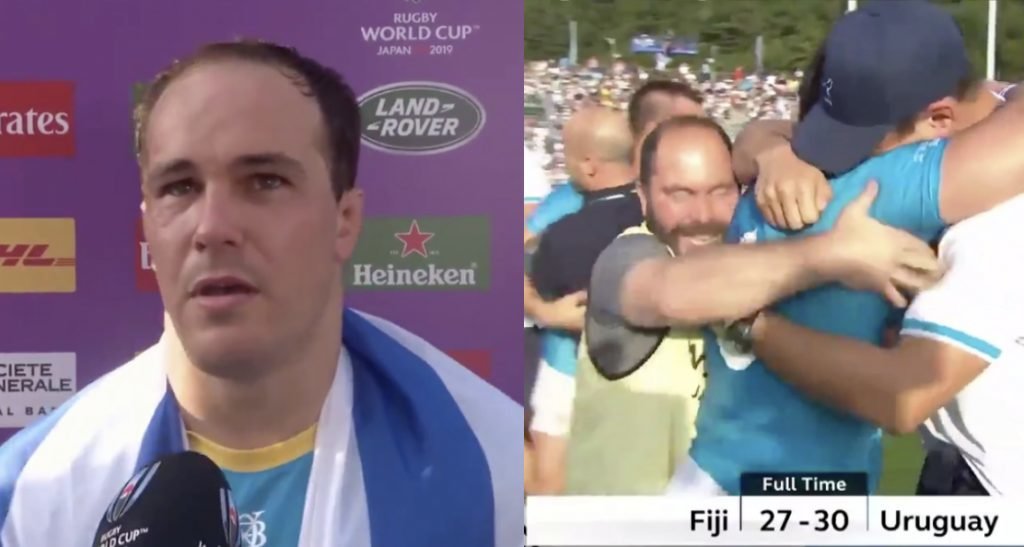 Absolute scenes at the Rugby World Cup today as Uruguay ranked 19th in the World beat Fiji. Many rugby fans woke up to this incredible news last night, completely shocked expecting an easy win for the men in white. Uruguay beat Fiji 27-30 in a game that was close until the very last play. Fiji gave Australia a shock today, and they’re 12 places above Uruguay in the World ranking. This was a real shock of a result.

If you’ve not actually seen the match yet, here are the highlights.

The scenes on the final whistle were amazing as the men in blue sealed an incredible victory in their pool.

There was an even better interview from the Uruguay captain who you could tell was clearly in a state of shock after such an incredible victory. The lad doesn’t even know what day of the week it is!

It gets even better for Welsh fans as this means that they now have less competition when it comes to Pool A, but who would back Uruguay against Wales now? Not many but you never know.

The memes have been brilliant, even from the official boys.

The Rugby World reacted as we expected, in shock and happiness.

Fiji were supposed to be the ones causing a World Cup shock, but they have been upset by the brilliant Uruguay.

Fitting that it has happened in Kamaishi. What a story!#FIJvURU #RWC2019

I want to watch Uruguay celebrate this forever. This has been amazing. Vamos Los Teros.

Ranks as one of the biggest RWC victories of all time.

We’re sure that we will be seeing more shocks as the World Cup goes on, this can’t be the only result?

Rugby World Cup 2019 Host City Kamaishi takes the next step in its recovery today with the first of two tournament matches at Kamaishi Recovery Memorial Stadium. Pool D’s Fiji versus Uruguay match will kick-off at 14:15, with Namibia taking on Canada in Pool B on 13 October.

The only newly built facility of the 12 Rugby World Cup 2019 venues, Kamaishi Recovery Memorial Stadium pays tribute to the people of Kamaishi whose lives were devastated by the Great East Japan Earthquake and Tsunami on 11 March 2011. A bustling port town on the edge of the Pacific Ocean, Kamaishi bore the full force of the tsunami as it came ashore in the north east of Japan. Throughout the area, 30 per cent of homes were damaged or destroyed, 60 per cent of businesses were inundated and 98 per cent of the local fishing fleet was wiped out.

Since that fateful day, the people of Kamaishi have devoted themselves to recovery, displaying a strength and resilience that has moved the world. As rugby is an integral part of the DNA of Kamaishi, a city renowned in Japan for its long and successful rugby history, the sport has played a vital role in these efforts. Directly following the disaster, Kamaishi recognised rugby as a way of inspiring local people during a time of incredible hardship.

With the long-awaited kick-off today of Rugby World Cup 2019 matches in Kamaishi, the city is taking another important step in its ongoing recovery.  The stadium was built on the site of the former elementary and junior high schools that were wiped out by the tsunami and has become a beacon for hope for the city. As the city prepares to welcome 16,000 spectators to the stadium for each match, as well as hundreds more to Kamaishi Civic Hall Fanzone, the stage is set for two stunning matches and the unbeatable hospitality of Iwate Prefecture.

Kamaishi received support from across the world following the Great East Japan Earthquake and Tsunami, so its local people are excited to give something back by offering visitors a warm welcome and a top-class rugby experience.

World Rugby Chairman Bill Beaumont said: “Today marks a very special day for World Rugby and for the people of Kamaishi as the city hosts its first Rugby World Cup 2019 match. When deciding upon host cities for Japan 2019 it was clear that Kamaishi was a place with rugby at its heart, with a great rugby history and a passionate local fan base. From the first moment World Rugby visited Kamaishi, we knew it would make a unique, special and fantastic Rugby World Cup venue.

“Rugby World Cup 2019 will bring four top international teams, thousands of fans and the attention of the world to the region, with the matches in Kamaishi promising to be one of the highlights of the tournament. I would like to pay tribute to the organising committee, the Iwate Prefecture and the people of Kamaishi for their hard work in preparing for Rugby World Cup 2019.

“The character-building values of rugby are closely aligned with the spirit of solidarity, integrity and determination shown by the people of Kamaishi in recovering from the tragic events of 2011. As we pause for a moments silence prior to today’s match, we will remember the victims who sadly lost their lives, and we will honour them by looking forward with hope and pride to a positive future for this region, with rugby at its heart.”