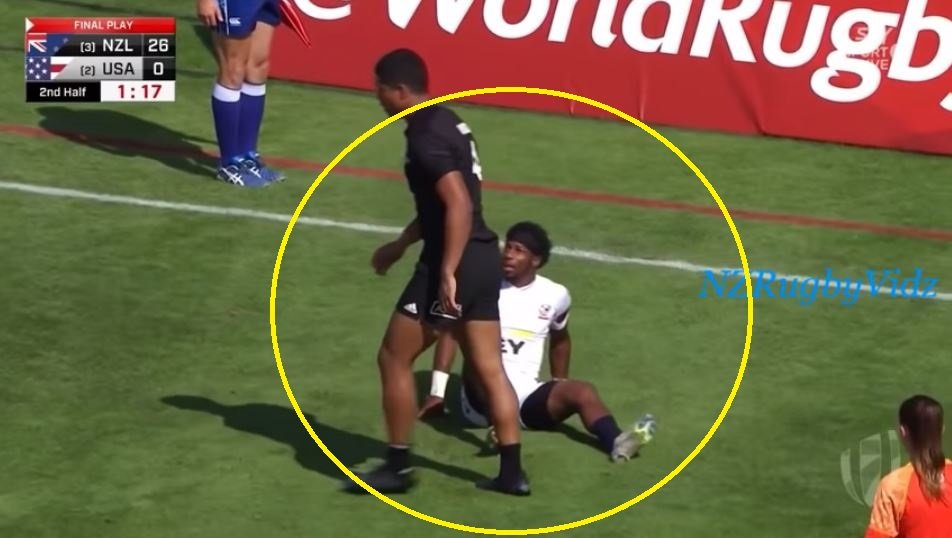 Despite leading 26-5, player has time for needless attack on Carlin Isles

Despite leading 26-0, this New Zealand Sevens player has time for needless attack on Carlin Isles.

It might not be the most violent of attacks, but does this speak to the core value of the All Blacks that we’re constantly being bombarded with. We suggest not.

Isles has his legs lifted up after already scoring a try. Utterly needless. Isles is a jewel in the crown of the Sevens game and to treat him like this a real shame.

This lad summed it up well: “Is it just me or do the @AllBlacks7s not embody the Rugby Core Values (particularly respect for others)? (And don’t get me started on Kurt Baker.)”

Is it just me or do the @AllBlacks7s not embody the Rugby Core Values (particularly respect for others)? (And don't get me started on Kurt Baker.) #Dubai7s @WorldRugby7s pic.twitter.com/oHcTMOqnht

In other news: To keep a New Zealand team scoreless in a rugby match is almost impossible; to prevent the All Black Sevens team from scoring in a final even more so.

Yet, that was exactly what the Blitzboks did on Saturday in the final of the Emirates Airlines Dubai Sevens, blanking the current Rugby World Cup Sevens and Commonwealth Games gold medallists in their 15-0 win, a defensive effort which left Springbok Sevens captain Siviwe Soyizwapi ‘almost speechless.’

The winger turned 27 on Saturday and received the best birthday present from his team as they delivered a masterclass, handing the captain his very first gold medal in the Dubai Sevens.

“I was saying to my roommate Ruhan (Nel) yesterday morning how great it would be if we won the tournament on my birthday,” said Soyizwapi after the team lifted the trophy at The Sevens Stadium.

“And now we did. Since that final whistle went, I have been almost speechless, taking in the effort the guys put out there.”

With the SA Rugby Sevens Academy team winning the International Invitational tournament in Dubai, it was understandable that Soyizwapi credited the Springbok Sevens programme as a whole.