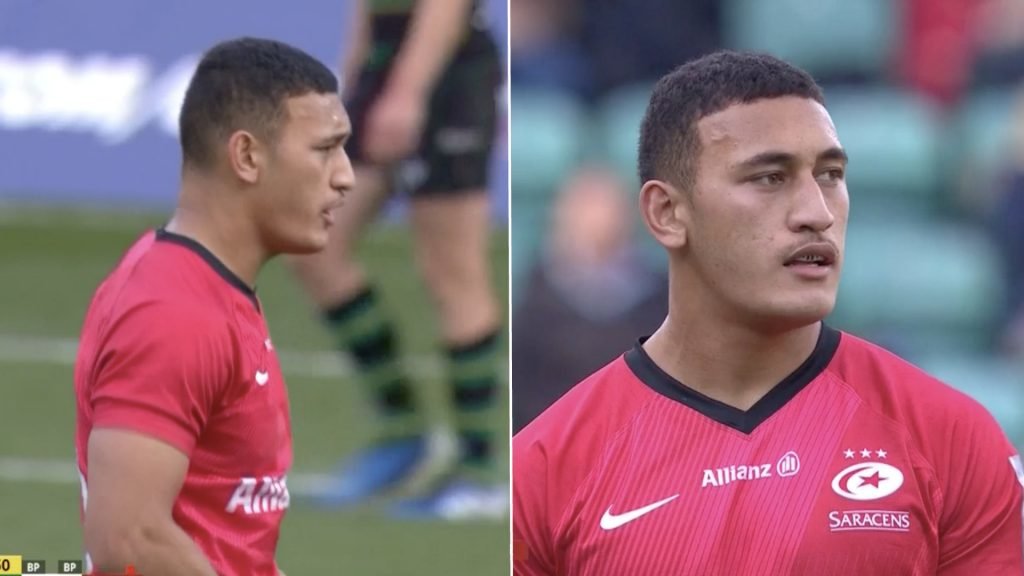 So Manu Vunipola, the cousin of Billy, had an absolute stormer at the weekend

So while Billy and Mako Vunipola have been dominating the headlines in English rugby with their performances for England at the World Cup, their younger cousin has been quietly making a name for himself at Saracens.

The 19-year-old, with the incredible name, Manu Vunipola, played brilliantly for Saracens in the Premiership Cup this weekend, scoring a try that was truly out of the top draw.

Vunipola plays at 10 for Saracens, and at such a young age, he will be hoping to make the most of these opportunities in the starting team whilst the likes of Owen Farrell are away on Rugby World Cup duty.

The son of Tongan international, Elisi Vunipola, he has been in fine form for Saracens this year, alway accumulating three tries in the Premiership Cup.

We’ve been watching the progress of Manu Vunipola for a couple of years now, and it seems like he has all the makings of a top-class 10 in rugby. He played for England this year at age-grade level and he performed well for the men in white there. His playing style is very similar to someone like Handre Pollard, being technically very strong with some serious speed to boot as well.

A very exciting prospect indeed for England. Fans on Twitter were quick to compliment the youngster on the try that he scored on the weekend.

Some fans have already suggested he should be in England training. We think it’s still quite soon.

At some point he has to get a go training with England. The guy is absolute quality

TRY! That is a lovely try from Manu Vunipola. He slaloms his way through and this game is well and truly getting away from Saints now. Vunipola kicks. Saints 28-47 Saracens.

He’s just 19 as well, we can’t forget that. Harlequins youngster Marcus Smith also had a flying start to his England career, being named as an apprentice in their squad, but he still is young as well.

One performance, of course, does not justify an untoward level of hype around a player, but if he keeps putting together phases and plays like this, then we are sure that there will be another Vunipola in World Rugby that everyone is talking about.

Here’s that try that he scored that has everyone talking!

How good was this?

Vunipola goes over for Saracens!

Manu, cousin of Maku and Billy, gets his try as Saracens rack up the points. pic.twitter.com/LE9mSN0cEl

If… England make it to the World Cup final in Japan, then Manu Vunipola would still have 5-6 weeks of solid first team rugby under his belt for Saracens. If he performs well in those games, could we see Manu Vunipola as the new long term 10 at Saracens.

Imagine that, three Vunipolas in one team.