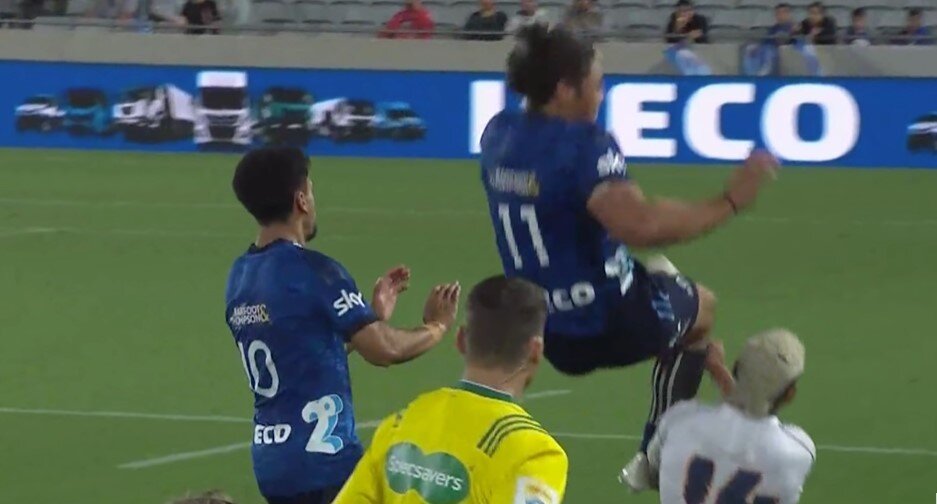 The thing about Southern Hemisphere rugby, is it’s always two years behind the rest of the world when it comes to player welfare.

That’s because they’re tougher human beings on average and they maybe don’t value the ‘health and safety’ culture of Europe in the way we increasingly do up north. We’re neither condoning nor applauding that and really that’s a debate for another time and place and it’s probably bigger than rugby.

Anyway, even in that context, we don’t think Caleb Clarke’s flying knee last weekend was in the grey area category. It was way out there in the red card zone.

Clarke launches himself and puts himself into a position in which he’s not in control of his body. It directly results in a heavy, concussive hit to the opposition player.

Rugby is moving to the stage where if you cause damage to another player’s head through your actions on the pitch, you are liable for that incident, regardless of context and intention.

That’s a more complicated concept to get one’s head around in a sport where anything can happen and frequently does, all within the context of split-second decisions being made by players.

A sport where collisions happen continuously by design.

It leaves little room for mistakes, but that’s where rugby has found itself in 2022.

Still, Mils Muliaina thinks differently. “How do you determine what Caleb Clarke has to do?” It’s the wrong question. It’s his decision, but if his decision results in a brain injury to a player, he’s on the hook for it.

Have a watch of this vision and see if you agree with Mils, who to be fair has a bit of experience with playing fullback.

Anyway, we want a sensible debate on this. It will ultimately we feel, boil down to the duel imperatives of player welfare versus maintaining a physical contest in the sport.